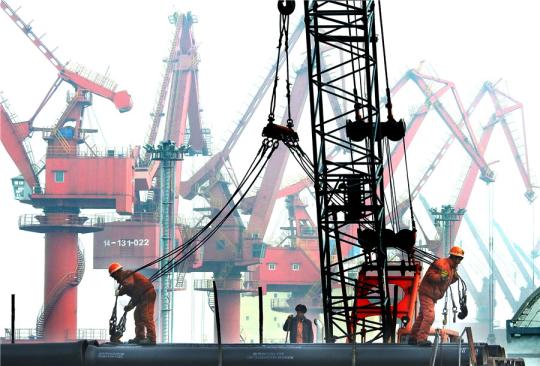 Employees unload steel pipes at a dock in the Lianyungang Port of Jiangsu province. (Photo by Geng Yuhe/For China Daily)

Efforts to be directed at reinforcing real economy amid global headwinds

Editor's note:Last year marks the fifth anniversary of the Third Plenary Session of the 18th CPC Central Committee. With the nation determined to deepen reform and opening-up, China Daily reporters look at different fields to check how the transformative policy has helped revitalize the national economy. Their reports below show tremendous achievements have been made to grow and stabilize the economy through well-thought-out fiscal and monetary policies, tax reforms and introduction of mixed ownership in central State-owned enterprises.

While the Chinese economy may be facing a bumpy start this year, a slew of measures aiming to soothe downward growth pressure and achieve more balanced growth are expected to cease broad-based cooling down, say experts.

"We face greater challenges to stabilize growth compared to the previous year. More efforts will be made to boost infrastructural growth, but in a more efficient way. Local governments need to cut costs and get used to spending less," said an official with the National Development and Reform Commission, the national economic regulator, who participated in drafting the annual government work report this year.

The government might lower its economic target for the year. China's gross domestic product (GDP) will be expected to rise in a range of 6-6.5 percent, lower than the 6.5 percent target set for 2018 but well ahead of most major world economies, according to people close to policymakers.

The remarks came after a number of key economic indicators fanned concerns of a continued growth slowdown in the world's second-largest economy, amid trade tensions with the United States.

Some analysts have warned that possible deflation risks lay ahead, after the Producer Price Index, a key measure of price changes, rose by just 0.9 percent year-on-year in December.

While 2018 as a whole saw exports rise 9.9 percent from 2017 and imports up 15.8 percent, December's figures were lower than those forecast and gave concern to global markets.

During a State Council executive meeting held earlier this week, Premier Li Keqiang said the economy faces increasing downward pressure, and the government needs to take more efforts to keep the economy afloat, according to report by Xinhua News Agency.

Some key priorities to stabilize growth have already been revealed during key meetings held since late last year. The Central Economic Work Conference, held last month, saw keeping growth on track and creating jobs as the main priorities for the Chinese leadership in 2019. The meeting also highlighted the urgency of building up a strong domestic market and creating a fair business environment.

Liu Shijin, a central bank monetary policy committee member, said China needs to be cautious about the complexity of lowering debt levels, and that it may take ten years or even longer to complete the task.

As focus is expected to shift to ensuring healthy growth, the government is taking a drip feeding approach - using multiple tools to ease monetary policy.

Some banks saw their reserve requirement ratio - the amount banks are required to hold back as security - cut four times last year. The move helps to free up funds for banks to lend, effectively giving a boost to the economy. The central bank has also announced a fifth cut since March 2016, with the aim that funds will go to alleviating financing pressure among small and medium-sized firms.

Looking ahead, the central bank is expected to continue taking administrative measures to maintain stability in total social financing growth. Lower levels of pressure on the currency could give more room to maneuver on interest rate policy, in terms of interbank rates and other market rates, though cuts to benchmark lending and deposit rates are not likely in the near term, according to economists with Goldman Sachs.