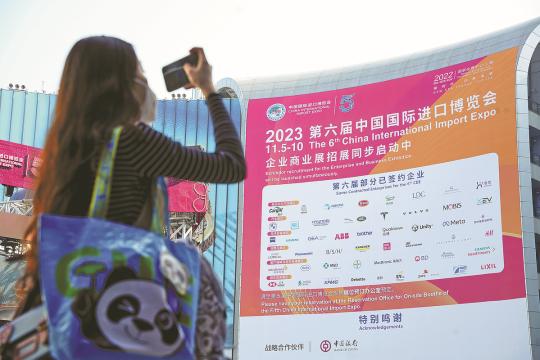 A visitor takes a picture of an advertisement for the sixth CIIE in 2023 in Shanghai. (LIU XIN/FOR CHINA DAILY)

The record value of deals reached at the fifth China International Import Expo, which came to $73.5 billion this year, reflects China's dedication to further opening-up and the huge potential of the Chinese market, said officials and top company executives on Thursday.

The value of the freshly inked agreements at the CIIE was up 3.9 percent from a year earlier, Sun Chenghai, deputy director of the CIIE Bureau, said at a news conference on Thursday, as the six-day exhibition wrapped up. 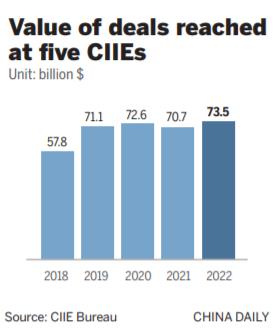 Up to 438 new products, technologies and service items made their debut at this year's CIIE, up from 422 last year, Sun said.

A digital CIIE platform was built for the first time this year. A total of 368 technology and equipment companies took part in the online version by showcasing their latest technologies and solutions, attracting more than 600,000 views.

The food and agricultural products area attracted the largest number of attendants, with 1,076 companies from 104 countries taking part in the event. The world's top 15 pharmaceutical companies and the 10 largest medical equipment makers were present at this year's CIIE, added Sun.

This is the fifth time for Astra-Zeneca to participate in the annual CIIE. The company's Executive Vice-President Leon Wang said the UK pharmaceutical firm has signed 45 contracts at this year's exhibition, most of which are aimed at increasing investment, deepening cooperation and boosting innovation in China.

"We are greatly encouraged by the fact that China's supply chain is still unimpeded as well as the advantages of China's manufacturing industry and the opportunities for expanding production capacity, as well as measures taken by local governments to support foreign investment," Wang said.

About 100,000 square meters of exhibition space has already been booked for next year's CIIE. Japanese water and housing products company Lixil Group is one of the companies coming to the next show.

Adele Tao, senior vice-president of Lixil Group, said that the company has witnessed the rapid transition from CIIE exhibits to products available to Chinese consumers.

"We have entered into a new partnership in China via the exhibition. The fruitful results that companies have reached at the CIIE mirror the ongoing optimization of the Chinese business environment and the country's continued efforts to advance higher level of opening-up," Tao said.

"We are very confident in the development outlook in China, which we consider a market of strategic importance," she added.

The fifth CIIE attracted 2,800 companies from 127 countries and regions. A total of 284 Fortune 500 companies and industry leaders attended this year's exhibition, with nearly 90 percent of them returnees from previous editions.

It is the fifth time for professional services provider KPMG to attend the CIIE. The company has also signed up for the exhibition next year.

Honson To, chairman of KPMG China and the Asia-Pacific, said that the CIIE has facilitated the integrated development of emerging industries in China, including new-age information technology, artificial intelligence, biopharmaceutical technologies and high-end equipment.

"The CIIE will continue to advance industrialization in the country, facilitating deeper integration between the digital economy and the real economy," To said.