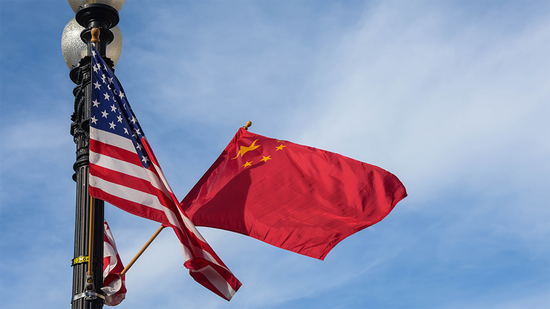 The national flags of China and the United States. (Photo/Xinhua)

Greater China-U.S. economic cooperation and ties are urgently needed to help the world face the impact of the novel coronavirus outbreak, according to analysts.

The COVID-19 pandemic has hit global supply chains and demand in various sectors hard, which means the world's two largest economies must take the lead and work together to fight the disease, reduce its negative effects and aid economic recovery, analysts agreed in an online forum organized by major independent think tank Center for China and Globalization on March 19.

The outbreak, which first hit Central China's Hubei province, is being felt across the globe, with hot spots now including Europe and the United States, meaning that all countries must surmount their differences and overcome the crisis together, said the think tank's vice-president Gao Zhikai, who moderated the forum.

The event, tapping the latest in advanced videoconferencing technology as part of anti-outbreak measures to limit physical contact, drew more than 560,000 participants and viewers worldwide.

For one, even as China has achieved significant results in its fight against the disease while the U.S. is in a national emergency because of the pandemic, trade cooperation between the two must continue to help cope with any economic fallout, Gao said.

"China and the United States are the two largest economies in the world … managing their relations effectively, instead of pointing fingers and exerting pressure on one another, is of great concern to everyone," he said.

Cui Fan, a professor from the University of International Business and Economics in Beijing, said the countries must push ahead with negotiations to ease trade tensions to help stem any economic crisis that may arise from the pandemic.

"The outbreak in China currently seems to be under control, but it still faces challenges beyond that such as economic slowdown, disruptions in global supply chains and affected businesses," Cui said.

"China and the United States should now strengthen economic and trade dialogue and the implementation of existing agreements."

China and the U.S. inked a phase one trade deal in January, marking a high point in their nearly two years of trade tensions. Last month, China moved to halve tariffs on imports of a number of U.S. products that followed recent tariff reduction decisions by the world's largest economy.

But even as economists began to hail the reciprocal moves, latest warnings are increasingly calling for the world to brace for economic recession due to the pandemic.

During the online forum, Huo Jianguo, former head of the Chinese Academy of International Trade and Economic Cooperation under the Ministry of Commerce, said that China looks set to resume its economic activity as it recovers from the outbreak, but the challenge is now overseas.

"Implementing what has been achieved effectively in the trade negotiations would be ideal … but that requires a lot of effort and proactive communication is key."

Sun Yongfu, former head of the European Affairs Department of the Ministry of Commerce, said that Chinese aid to Europe to fight COVID-19 has been significant, with more China-EU cooperation expected.

There should be similar China-U.S. cooperation in fighting the disease and supporting economic development, he said.

"If we strengthen cooperation in science and technology, in fighting the pandemic, especially in terms of vaccines, research and development, and we can similarly support and cooperate with each other in trade, then we will survive together," Sun said. "I believe that China and the United States should also develop along the road of cooperation rather than that of mutual criticism."

As seen in medical supplies alone amid the outbreak, China's position in global industrial chains in the short and long term remains firm and significant, said Teng Jianqun, director of the Department of American Studies at the China Institute of International Studies.

Xu Hongcai, deputy director of the economic policy committee at the China Association of Policy Science, said that channels for medical supplies, treatment and support must be increased and kept open.

There must be high-level dialogue to help further lower trade barriers toward cooperation, he said.

"In terms of bilateral cooperation, especially trade, now is an opportunity. Not only must we create conditions to implement the first phase of economic and trade agreements, we must also expand trade, especially with regard to cooperation in medical supplies and so on, including technical cooperation in vaccine research and development, Xu said.

"Expanding trade is important because the disruption of supply chains is particularly obvious in the early stages of the epidemic. We must reduce bilateral tariffs. We can be bolder and implement zero tariffs in subsequent stages. In many ways, we hope that the United States will take the initiative. We must promote bilateral economic and trade cooperation… in the face of the epidemic."