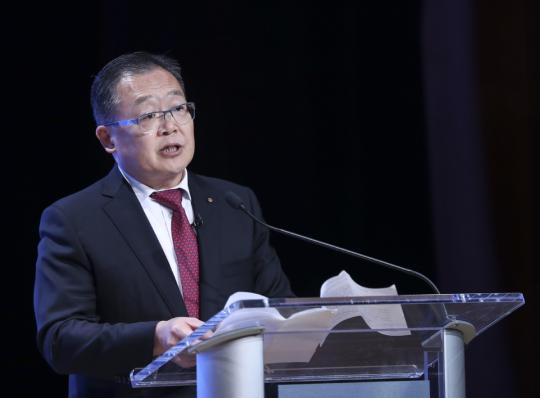 Xu Chen, president and CEO of the Bank of China USA. （Photo/China Daily）

EDITOR'S NOTE: Xu Chen is president and CEO of the Bank of China USA. In these remarks presented at China Daily's Vision China event in New York on Sept 17, he shared his perspectives on how to promote a more peaceful, stable and prosperous global community.

Today's event gives full expression to the word "NEW," as evidenced by the NEW thinking for a NEW era. We are facing NEW opportunities amid NEW challenges. Today, I'd like to take this opportunity to share with you my thoughts on the Sino-U.S. relations through a NEW lens – Social Responsibility.

As early as 2500 years ago, the Chinese philosopher Confucius proposed a much-quoted idea: "Improve upon yourself first, then manage your family, and later govern your state; that is the surest way to bring justice and virtue to the world." or in the Western concept: "From little things, big things grow."

This doctrine implies that there is a calling for social responsibilities. Almost in the same era, Mencius also promoted a similar idea: "Respect all elders as you would respect your own; love all children as you would love your own."

The key message is that with a sense of social responsibility in mind, one would care about others; furthermore, if everyone is socially responsible, the world will be in harmony.

A "corporate citizen" understands that profit is far from its only goal. The concept of CSR, a universal principle for modern corporate management, emphasizes giving back to the community, to the country, and even to the entire world.

Ever since I relocated to our New York office, I've had a deeper understanding of CSR. Here in the U.S., regulators take it seriously, especially in the financial industry. For instance, the Federal Reserve and the Office of the Comptroller of the Currency (OCC) , among others, have developed specific regulatory policies, the Community Reinvestment Act – CRA – to ensure that financial institutions fulfill their social responsibilities.

Indeed, the East and the West do share these common values on social responsibility that transcend time, space, countries and cultures.

Over a decade, the Bank of China Group has been committed to thoroughly helping lift four deprived counties out of poverty in China's Shaanxi province, through our internet-enabled platform for farmers to sell local agricultural products, besides providing lending supports to improve the local infrastructure conditions.

Take climate change, for example. It is a key to "state social responsibility" for all countries.

As we are living in the global village, failure to protect nature and our mother earth would strip us of any social advancement, let alone wellbeing for all, like we Chinese say "a river can't run without headwater, or a tree can't grow without roots."

President Xi Jinping said that "clear waters and green mountains are as valuable as mountains of gold and silver," which vividly illustrates the dialectical relationship between environment and economy.

The "Made in China 2025" strategy primarily shows that China values emission or energy consumption reduction as one of its top priorities while restructuring and upgrading its economy. China does not seek growth at the expense of its commitment of "state social responsibility" to the world. Similarly, Belt and Road Initiative projects aim to help more of the under-developed countries by sharing the Chinese decades' development.

As the two largest economies in the world, China and the U.S. need to work together and fulfill their "state social responsibilities" to maintain global stability and promote growth of a "community of shared future."

However, recently, some voices have bubbled up that a fast-growing China may pose threats to the U.S. in the future, and they aim to contain China's development. The so-called "Thucydides Trap" theory has been cited a lot. However, most foreign policy commentators might have ignored the fact that in the 21st century, the improvement of people's moral standards and lessons learned from history have added new elements to human wisdom, the global economy has become increasingly integrated with the progress of globalization, and the military powers are rebalancing the world's geopolitical framework. All such changing factors are beyond the knowledge of the ancient Greeks.

In my opinion, China's remarkable growth has offered great opportunities to the U.S., for China is now capable of sharing more "social responsibilities" on the world stage and has become a stronger partner for the U.S.. Working closely, our two countries can take more of the world's challenges and risks, and contribute more to global economic growth, political stability, and social progress.

Such examples abound in history. In the past financial crises, China has assisted the world in tiding over tough times. Those are the best examples of China's efforts to fulfill its "state social responsibility" and maintain global economic stability. Back in 1997, when the Asian financial crisis broke out, China withstood the pressure of currency depreciation and even narrowed the floating range of the yuan against the U.S. dollar. China's move helped East Asian countries stabilize financially and avoided the spread of a currency crisis. It also protected the developed economies against the impact of the crisis.

Again, in 2008, as the U.S. and then the world suffered from the financial crisis, the Fed began to implement Quantitative Easing (QE) to counter liquidity pressure. China had every reason not to echo America's easing monetary policy. However, if China were not to take actions, the policy effectiveness of the Fed would have diminished, as the Chinese market would soak up the liquidity released from the U.S. market through the international financial system. At that crucial time, China worked in concert with the QE measures of the U.S. by adopting a proactive fiscal policy and a prudent and moderately easing monetary policy. This decision helped boost the effectiveness of the Fed's economic stimulus indirectly and stabilize the global economy.

Imagine that China and the U.S. worked against each other, shirked their own "state social responsibilities," and sought vicious competition out of mistrust, the world economy would continue to deteriorate and ultimately hurt all countries. When commenting on the Sino-U.S. relations, President Xi once pointed out that both countries will "gain from collaboration and lose from confrontation." Just as a pertinent Chinese saying goes, "No egg stays intact under an overturned nest." No one can escape unscathed in a great disaster. If China and the U.S. see each other as a threat and refuse to work together, then the downfall of global economy would be the "overturned nest" where no single country would get spared.

Besides, human beings are facing many challenges, such as terrorism, natural disasters, contagious diseases, and poverty. I believe, by joining hands, the countries can jointly promote a more peaceful, stable, healthy and prosperous global community.