HK chief: Dialogue seen as 'a must' to bring change 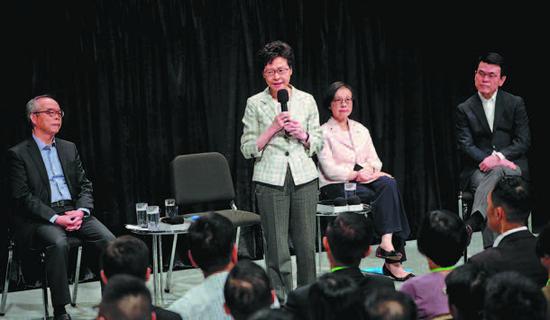 Direct dialogues with Hong Kong's communities are not political stunts, but "a must" to help society change, Chief Executive Carrie Lam Cheng Yuet-ngor said as she launched the first of the much-awaited open dialogues on Thursday.

A total of 150 participants, selected randomly from over 20,000 applicants from different walks of life, took part in the first session of the event at Queen Elizabeth Stadium in Wan Chai district.

"Today is a first step," said a woman surnamed Choi who participated. "The government showed the goodwill to listen to the people. I think it is a very good start. I really miss the Hong Kong we were all familiar with. I hope peace will return soon in the city. And I also hope (the government's efforts) will also restore people's faith in Hong Kong, too."

In her opening remarks, Lam said the government is responsible for finding a way out for the city.

Having such a dialogue is not easy under the circumstances, she said. But, no matter how hard it is, the government maintained that direct talks should be launched, she said.

Thursday saw the first such dialogue since massive protests began in June, sparked by a now-withdrawn extradition law amendment bill.

Another participant, a middle-aged woman, said housing was her first concern. "I hope the government's allocation of resources will not disproportionately favor one particular demographic, such as a certain age group or single people."

Education also was a concern: "I hope the subject of Chinese history will be reintroduced at schools. It's important for everyone to know the history of their own motherland."

She also said she had three suggestions: that the government help people overcome the difficulties they face because of the prolonged social turmoil; that the violence and volatility be ended; and that the dialogue continue to engage the community to find solutions.

Lam conceded that rebuilding people's trust in the government is hard, but called Thursday's dialogue a positive first step.

"Hosting a dialogue is not for the sake of just having one. It is not a public relations stunt. There is a need for a complete change, from top to bottom, with the aim to making the Hong Kong that we all love be better in every way."

The government hasn't listened enough to the public, Lam said. She said she hopes people understand that the government always has cared about Hong Kong's people.

She pledged more talks will continue to tackle deep-rooted problems. Lam also said, "We must act in accordance with the rule of law."