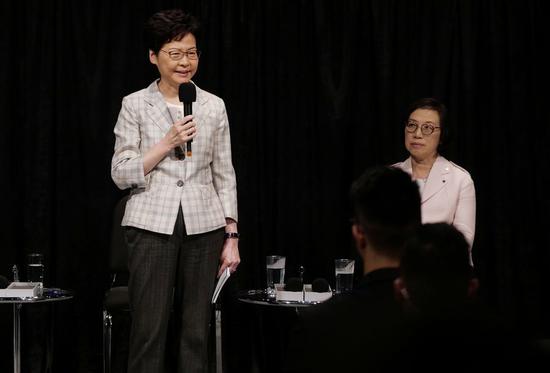 HKSAR Chief Executive Carrie Lam and four secretaries of the HKSAR government had candid talks with about 130 representatives of the public at Queen Elizabeth Stadium in Wan Chai from 7 p.m. to 9:30 p.m.

The representatives started arriving at the stadium at around 6 p.m.. Their seats were chosen by lot. Six people were randomly selected for each round of talks. Lam responded after they all spoke.

"This is only the first dialogue. More dialogue sessions will be held in other parts of Hong Kong in the future," she said.

The rule of law is the core value of Hong Kong, Lam said, adding that all people are equally treated before the law, and whoever violates the law will be punished in accordance with the law.

Some representatives appealed that demonstrations should be peaceful, and the government should strengthen management of teachers to avoid politics entering the campus of primary and secondary schools too early.

The media should be fair and neutral, not misleading the public or discrediting the government. The government should take measures to stop violence and chaos and restore order in Hong Kong as soon as possible, they said.

Some said they were pained to see the recent sharp drop in visitors to Hong Kong and the burning of the national flags by rioters. They called for the government's attention to solve deep-seated problems behind the turmoil, such as high housing prices and lack of ascending opportunities for young people.

After listening to the representatives, Lam said she was grateful for their willingness to share their views and would continue to address the deep-seated problems in Hong Kong society.

"Young people are the future of Hong Kong. The HKSAR government has introduced a series of policies to provide conditions for their development," said Lam.

Lam also stressed that the bottom line must not be crossed. Full and accurate implementation of "one country, two systems" is the key to maintaining Hong Kong's strengths and future development. Peaceful demonstrations are fine, but violent attacks on others are not, she said.

"Now we need to calm down, communicate with each other and listen to each other," she said, adding that the dialogue will continue.

In early September, Lam made a televised speech, proposing four-point actions to turn around the current difficult situation, including to initiate community dialogues starting this month.