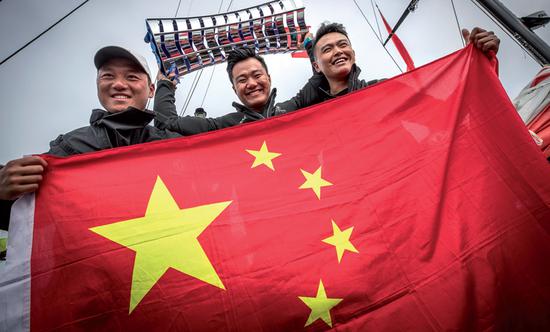 Chinese members of the Dongfeng crew celebrate their victory in The Hague on Sunday. (Photo provided to chinadaily.com.cn)

The Dongfeng Race Team became the first Chinese-flagged campaign to win the Volvo Ocean Race after winning a tense and exciting final leg on Sunday from Gothenburg, Sweden to The Hague in The Netherlands.

Three teams started the last leg of the world's longest race tied on points. If either of the other two - Spanish MAPFRE and Dutch Team Brunel - finished first they would have walked off with the silver cup. But Dongfeng heeded the advice of its weatherman and took a route close to the German coast to win the day.

The Dongfeng crew - made up of men and women from seven nations and including the Chinese sailors Chen "Horace" Jinhao and Xue "Black" Liu - was always in the hunt for stage wins and was also the fastest boat in terms of total elapsed time around the world.

French skipper Charles Caudrelier, 44, said: "I cannot believe it. Even until the last 10 minutes I was saying something was going to happen. We have had so much frustration over the last nine months, never winning a leg. We were always in a good position at the start and then failing and failing and, as a skipper, it was really tough."

Caudrelier also gave a shout out to Dongfeng Motor Corp - the Wuhan-based truck and car manufacturer that bankrolled the campaign.

"Thank you to Dongfeng Motor Corporation because they trusted me so much since the beginning and gave me the opportunity to lead this dream team that I am so proud of," said Caudrelier.

Chinese sailor "Horace" said he cried with relief and happiness when Dongfeng crossed the finish line. "I think there is no better feeling," he said amid the dockside celebrations.

"We have worked for so long on this. Thank you to Dongfeng for giving us the biggest trust and biggest support so that after the last Volvo we could renew the dream of what we didn't finish last time. That is why me and Charles and the other team worked so hard for this. Today we deserve it; it is the best moment, and I am looking forward to the next challenge in the future to keep this going," Horace added.

A spokesman for Dongfeng Motor praised the team for overcoming the physical and mental challenges presented by some of the most extreme sailing environments on earth. "The race is beyond just competition - it is an ultimate test of human beings and a remarkable exploration of sailing culture."

Bruno Dubois, team director, paid tribute to the way his crew handled a tense and difficult final leg. "We sailed our own race and stuck to our guns in the final stages," he said. "Charles and everyone on board can be extremely proud of their performance in this race. Although we never won a leg until today, we were always there or thereabouts and we never gave up."

Carolijn Brouwer, 44, of The Netherlands alongside Marie Riou of France and Justine Mettraux of Switzerland are the first women sailors to win the Volvo Ocean Race. Brouwer arrived in her home country on Sunday cheered by thousands of Dutch fans who turned out in a flotilla on the water to watch the finish.

"It's crazy," said Brouwer moments after Dongfeng docked. "It has been an insane race; it has been an insane leg. We always said that we were going to win a leg, and there's no better leg to win than the last one - and here we are and we have won the race."

"Horace" also had a prediction: "In the future, there will be more Chinese sailors winning and getting results like this."