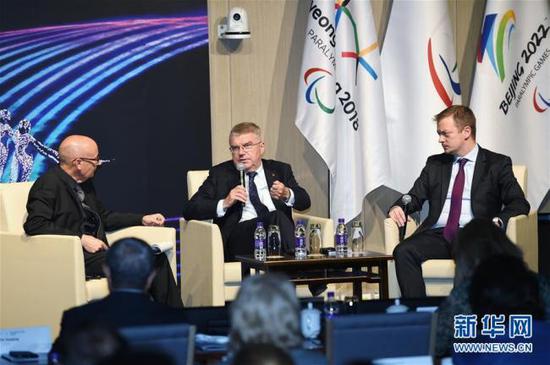 The official debriefing of the PyeongChang 2018 Olympic and Paralympic Winter Games was held this week in Beijing with more than 600 participants from relevant stakeholders sharing lessons from PyeongChang. The meeting also sought to reinforce the implementation of Olympic Agenda 2020's "New Norm".

"If there is one message that I would like everyone from the future Organizing Committees and interested cities to remember, it is that this new approach has partnership and feasibility at its heart," said International Olympic Committee (IOC) President Thomas Bach.

"Our goal is to make the Olympic Games best fit the long-term needs and goals of the host cities. With Olympic Agenda 2020, we have turned the page and are writing a new chapter in the way future Olympic Games are organized," Bach added.

Throughout the debriefing, the PyeongChang Organizing Committee (POCOG) contributed its expertise on how Olympic Agenda 2020 helped it deliver an iconic sporting event that will offer long-lasting benefits to the region. The President of the Organizing Committee for PyeongChang 2018, Lee Hee-Beom, also announced that the Games concluded with a multimillion-dollar surplus.

"The New Norm", an ambitious set of 118 reforms that reimagines how the Olympic Games are delivered, was announced at the 132nd IOC Session just before the start of PyeongChang 2018. The plan, which focuses on six recommendations from the Olympic Agenda 2020 related to the organization of the Games, will provide cities with increased flexibility in designing the Games to meet long-term development goals, and will ensure that host cities receive more assistance from the IOC and the wider Olympic Movement.

"In the past when we talked about the Olympic legacy, it usually referred to the newly-built infrastructure or competition venues. But now that is no longer our focus," said Bach at the Debriefing.

"It's encouraging to see Beijing 2022, which is the first city to fully benefit from the Agenda 2020, is already taking on its potential. That makes us very confident about [an] excellent Olympic Winter Games," he added.

"Our focus first is sports. We can see the best conditions provided to the world best athletes lay a solid foundation for future World Championships and World Cups. Secondly, hundreds of millions of Chinese people will get familiar [with] and fall in love with winter sports. It's a great legacy not only for China but also for the world," Bach added.

The first host city to fully benefit from Olympic Agenda 2020, Beijing 2022 has incorporated legacy planning from the earliest stages of preparations. Among the 13 competition and non-competition venues in the Beijing zone, 11 are legacy venues from the Beijing 2008 Olympic Games.

These include the iconic "Bird's Nest" National Stadium, which will be used for the Opening and Closing Ceremonies in 2022. The Water Cube Aquatics Centre will be the curling venue. The National Indoor Stadium and Wukesong Sports Centre will host the ice hockey events, while the Capital Indoor Stadium will host figure skating and short track skating events. The Beijing 2022 Olympic Winter Games will allow a global audience to see this innovative re-use of existing venues from 2008.

The Beijing 2022 Organizing Committee's headquarters is located at a former steel mill that was closed down in 2008 before the Olympic Games, over concerns about air pollution at the time. This location, which will be the venue for the Big Air competitions in 2022, will also include leisure and sports facilities for both public enjoyment and elite training, as well as a winter sports museum.

Further incorporating the Olympic Agenda 2020, Beijing 2022 has made it mandatory to include sustainability in all areas of planning the Games, and will use the Games as a catalyst to improve the health of the population, tackle environmental issues and promote sustainable economic growth in the region.

"We're extraordinarily satisfied with the advancement of the project. It's as we've never expected anything else. It's right on time, well-done, well-executed by a team of very experienced people. You have the people with the Olympic experience which is very rare in any city," Samaranch told Xinhua.

He emphasized it is very important for the IOC and for the future of the Olympic movement that the Beijing Winter Games are within a very reasonable budget, adding that this would set an example for future generations.

"We wouldn't be impressed by a big budget... [a] reasonable budget would encourage the citizens on the world to follow your example in the future," he added.