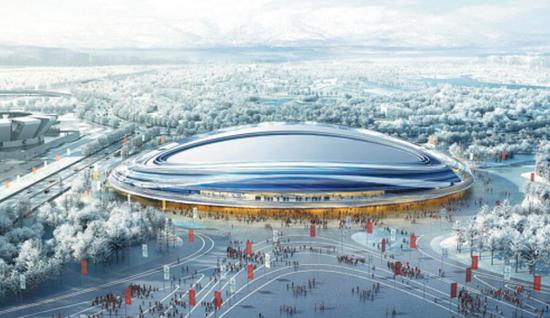 Although still under construction, Beijing's speed skating venue for the 2022 Winter Olympics has impressed the International Skating Union with its unique design and sustainable legacy plan.

After an inspection visit to the construction site of the National Speed Skating Oval on Sunday, an ISU delegation led by vice-president Tron Espeli expressed confidence in the new permanent venue's Olympics function in 2022 and post-Games operations.

"I'm sure the athletes will be very fascinated and very happy to be welcomed by such a venue in 2022," said Norway's Espeli, who was in Beijing with ISU technical delegate German Panov of Russia and Canadian ice-making expert Mark Messer.

Since the start of its construction in April 2017, the oval, one of two new Olympic competition venues in Beijing for the 2022 Games, has been progressing on schedule and is expected to be completed by the end of 2019.

The other new facility is the snowboard big air venue located in the western suburb of the capital.

Situated in the Olympic Park next to the Beijing 2008 Summer Olympics tennis facility, the National Speed Skating Oval boasts a spectator capacity of 12,000.

Dubbed the "Ice Ribbon", the venue stands out for its sleek look, which features 22 light arcs, or ribbons, surrounding its exterior to symbolize the speed of the sport and the year the Games will be held.

To have a speed skating rink positioned in a landmark area of the capital city of the world's most populous nation country is an advantage for the exposure and visibility of the sport, Espeli said.

"It is a dream come true for speed skating to come to a really great audience, considering Beijing is one of the biggest cities in the world and (the oval) is in one of the most well-known areas of the city," he said.

In addition to the site visit, the ISU delegates held extensive meetings with Beijing 2022 organizers, the venue owner and operational staff to discuss a wide range of topics, including competition schedules, key functional areas of the oval, ice-making facilities, lighting and sound systems, camera positions and legacy plans.

The oval's flexible design, which enables it to stage long- and short-track speed skating, figure skating, hockey and curling competitions, earned praise from the ISU for its potential for continuous use after the Olympics.

The public will also be able to routinely access the oval for sport and recreational purposes, with some operational areas transformed to catering, exhibition and entertainment functions, according to the venue's operation team.

"We are facing a very fortunate situation, with this venue being available two years before the Games, giving the best opportunity to create optimal conditions," Espeli said.

"It's very encouraging to see coexistence between speed skating and other ice sports and public use in the oval's post-Games utilization plan," he added.

Invested and managed on a public-private partnership overseen by the Beijing municipal government, the venue project has involved funding, resources and operational expertise from multiple private shareholders since the beginning of construction to share the cost and diversify future operational plans.

"It will be an effective model for encouraging the private sector to offer innovative and commercially practical solutions for the sustainable use of the venue," said Wang Gang, an official from the Beijing governmental office overseeing the project.