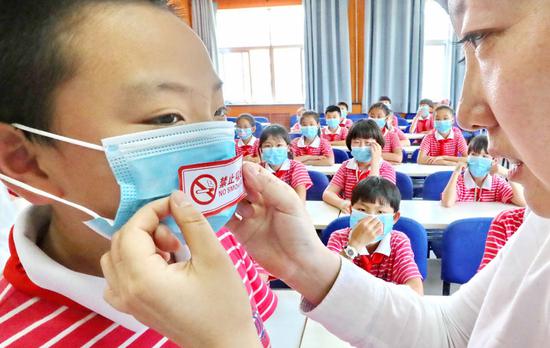 A social worker places a no-smoking sticker on the mask of a primary school student in Qinhuangdao, Hebei Province, on Wednesday, ahead of the World No Tobacco Day, which falls on Thursday. (Photo provided to China Daily)

With the smoke-free legacy of the 2008 Beijing Olympics still in mind, the capital wants to cooperate with Tianjin and Hebei province to present a smoke-free Winter Olympics and Winter Paralympic Games in 2022.

The Patriotic Health Campaign Committee and the health and family planning commissions of Beijing, Tianjin and Hebei launched a tobacco-control project for the Games at an event on Tuesday. World No Tobacco Day falls on May 31.

Duan noted that Beijing imposed comprehensive tobacco controls during the 2008 Games. Because the 2022 Winter Olympics will be held in Beijing and Zhangjiakou, Hebei province, and Tianjin is an important part of the three-way cluster, the effort to go smoke-free needs to involve them all, she said.

"There will be a total ban on smoking at Olympic and Paralympic venues, including bars and restaurants in the Olympic Village. Also, no tobacco products will be allowed at any Olympic venues. The scoreboards and broadcasting should promote the smoke-free policy of the Olympic Games. And tobacco sponsorships will be completely prohibited," she said.

Jiang Yuan, deputy director of the Chinese Association on Tobacco Control, said that Beijing and Tianjin already had local legislation prohibiting indoor smoking in public places, in workplaces and on public transportation, while Hebei so far has only one city－Tangshan－with such legislation.

The smoke-free Winter Olympics campaign will be a good opportunity to further promote tobacco control across the whole province, Jiang said, adding that a national indoor smoking ban would also be a good idea.

Beijing's disease prevention and control center has begun making technical proposals that strengthen the monitoring and assessment of smoke-free environments. It has also made efforts to exchange tobacco-control experiences with institutions such as disease control centers and health education centers in Tianjin and Hebei.

Duan noted that the three regions established the Healthy City Construction Alliance in 2017, and one of its jobs is to promote a smoke-free environment. Experts and various other resources will be shared to help achieve a smoke-free Winter Olympics, she said.