AI towns to get go-ahead 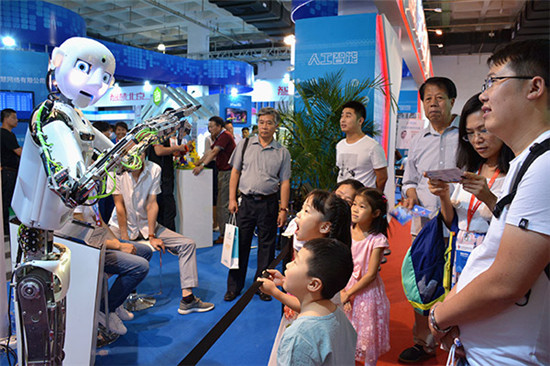 Delighted children and adults watch the performance of a robot at the 2017 China Beijing International High-Tech Expo on June 8. （Photo/China Daily）

Shanghai unicorn company Deep Blue Technology will roll out two artificial intelligence towns featuring driverless vehicles in East China's Shanghai and Jiangsu province in the next three months, which will be the first of their kind in China.

Deep Blue founder and Chief Executive Officer Chen Haibo said that the AI towns will be located in southeastern Shanghai's Lingang area and Changzhou in Jiangsu province, with each town covering about 4 square kilometers.

Established together with the local governments, the AI towns will be controlled by an AI brain, overlooking most of their daily operations, said Chen. All the cars running in the town will be driverless vehicles with no police directing the traffic. The town will also work as an incubator for AI companies, he said.

Founded in 2012, Deep Blue's products have reached 17 overseas markets, covering nine areas in the AI industry including retail, robotics, driverless vehicles, security, education, biological intelligence and defense. It has received orders valued at more than 10 billion yuan ($1.6 billion) so far this year. It merged three domestic AI companies and invested in two overseas AI companies in May. While the company's workforce is currently 400, the figure is expected to reach more than 1,000 by the end of this year, said Chen.

"We have also formed an investment company recently since mergers and acquisitions in the industry can help to address the weaknesses of Deep Blue," he said.

Shanghai Stock Exchange has held talks with Deep Blue about its planned listing. Chen said that at least three companies under the Deep Blue group will be listed in domestic and overseas stock markets in the next five years.

One of the key AI technologies that Deep Blue grasps is the recognition of all the biological information of the palm, which includes the structure of the veins and tissue. As Chen explained, this kind of recognition is much more complicated and much safer as such information can be hard to be duplicated and obtained. Therefore, such technology, which was 100 percent developed by the local team of Deep Blue, is superior to the existing technologies such as fingerprint, iris and even DNA.

Shanghai Party secretary Li Qiang visited Deep Blue in early May, saying that the company has set a good example of embodying its technology with products and services. The AI industry can reach substantial growth in the city only when companies are resolved to serve people's daily needs with technology, he said.

According to a guideline released by the State Council in July, the value of China's AI industry will exceed 1 trillion yuan by 2030.

Chen said that China is sure to lead the AI industry given its solid basis of mathematics talents－which is key to computing of AI, the huge market potential and the rise of the younger generation who embrace new technologies rapidly.