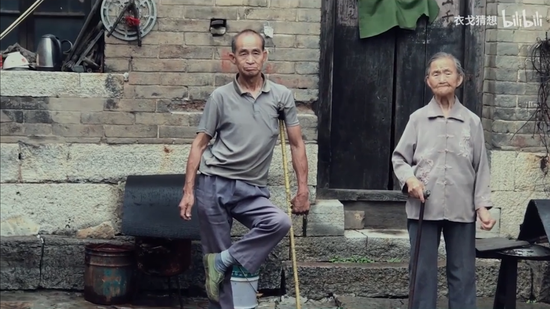 A video of a 66-year-old man called Erjiu has gone viral on Chinese social media after his nephew Tang Hao shared the man's condensed but heartstring-tugging life story on short-video platform Bilibili on Monday.

Using the name "Yigecaixiang", Tang uses witty storytelling in the 11-minute video to convey the experiences of Erjiu, which translates as second-oldest maternal uncle. The man, who uses a cane due to a longtime disability, is portrayedas a common hero who never bows to life's difficulties, but strives instead to lead a full and meaningful village life.

In the video, Erjiu is shown as a "young genius" who always performed well academically at school during childhood. However, while he was a teenager, a high fever was misdiagnosed and he was given the wrong medicine, which resulted in Erjiu losing the use of his left leg.

Erjiu, who lay in bed in low spirits for one year afterward, then learned carpentry by watching a carpenter going about woodworking tasks for three days, and he later did woodworking in the village and the town. Around the time of reform and opening-up, which began in the late 1970s, Erjiu came to Beijing and did some woodworking for soldiers.

When Erjiu's two young sisters got married, he made them furniture, which was a luxurious gift for young women living in the countryside in the 1980s.

"He couldn't give Ningning a good or decent education, but now she is the most filial one in the village," Tang says in the video.

According to Tang, it would be inaccurate to merely define Erjiu as a carpenter, since he demonstrated his broader skills by fixing an electrical socket patch panel, a gas stove and a toy car during the three days the video was shot in the village. He also makes erhu — a traditional Chinese musical instrument — with wood, using fishing line for strings and snakeskin as covering.

Erjiu, who said that he never felt sorry for himself despite his difficulties, now takes care of his 88-year-old mother. At the end of the video, Tang shares a sentence that Erjiu found in a book decades ago: "Be determined and not afraid of sacrifice to overcome all difficulties and win the final success."

Erjiu's self-reliance and tenacity not only moved Tang, but also have touched the hearts of millions of online viewers. As of Wednesday, the video had been viewed more than 23.8 million times, and was given around 3.65 million likes on Bilibili.

"He has constantly faced difficulties and mishaps in his life but always tackled them with his wisdom and positive attitude," Chen Pei, 28, who is from Beijing, told China Daily. "He never complained about the injustice of fate. ... Thinking about us young people, we have a better material life, but deficient spiritual guidance. In fact, the video encourages me and gives me quite strong power to strive for a better life, since I have a sound body and I'm still young."

Geng Xiangshun, founder of the Sichuan Zhixin Youth Social Innovation Organization and an online celebrity at Sina Weibo, commented after watching the video that "we should praise people who bravely face life and fight with fate after suffering mishaps, like Erjiu".

Tang, the video's creator, posted on his Bilibili account on Wednesday morning that so much attention from the public made him a bit nervous, and that Erjiu's adopted daughter, Ningning, has taken Erjiu and his mother somewhere else so they won't be disturbed.