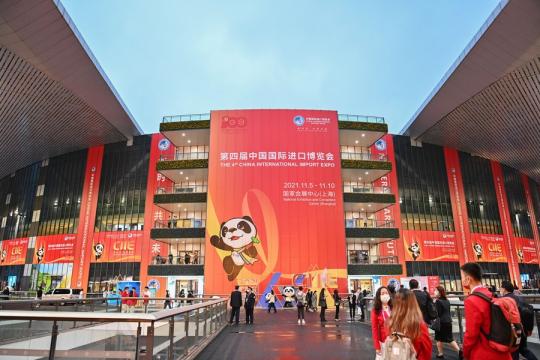 The fifth China International Import Expo began the 100-day countdown to its opening on Wednesday, with the conference expected to demonstrate the confidence of companies in China's economic resilience and the higher level of its economic opening-up, experts and conference officials said.

More than 260 industry leaders and Fortune 500 companies have applied to attend this year's CIIE, which will be held in Shanghai from Nov 5 to 10, Sun Chenghai, deputy director of the CIIE Bureau, said at a news conference on Wednesday.

Exhibitions on farming and artificial intelligence will be included for the first time this year to better address market demand and serve the country's development strategy, said Sun.

It will be the fifth year in a row that multinational beauty giant L'Oreal Group will be present at the CIIE. Serving as chairman of the CIIE Enterprise Alliance, L'Oreal will release a number of new products and technologies at this year's show, including a hair dyeing kit designed for home use scheduled to make its Asian debut.

The company's investment firm, which L'Oreal launched in Shanghai in early May, may also demonstrate its latest innovation results at the CIIE, said Fabrice Megarbane, CEO of L'Oreal China.

"Through our efforts to advance high-quality growth with various innovations made in China, we are highly confident in our development prospects in the country," he said.

Italy's largest pet food company, Monge &C SpA, will be another first-timer at the CIIE this year. As soon as Monge signed cooperation agreements with its Chinese partner in November last year, the Italian company applied to take part in the expo, said Tang Yu, business development director for Monge in the Asia Pacific.

"The CIIE has demonstrated China's unswerving goal of further opening up and its dedication in promoting international trade. As its scale expands annually with ever improving quality, the CIIE is highly influential for companies to promote their brands and products," Tang said.

More favorable tax, customs and market entry policies will be introduced at this year's CIIE, said Sun, the CIIE Bureau deputy director. More free booths will be provided to companies from lesser developed countries. Supportive measures will be more favorable for small and medium-sized enterprises to address difficulties caused by the COVID-19 pandemic and uncertainties in the global economy, he added.

The CIIE has become a prime choice for companies where their latest products and cutting-edge technologies make their global debut, said Sun. Up to 150 new products and technologies were released at the CIIE over the past four years. The total value of deals in the expo has exceeded $270 billion.

Shen Kaiyan, head of the Institute of Economics at the Shanghai Academy of Social Sciences, said that the CIIE is "a must for free trade and economic globalization". The exhibition is also in line with the country's economic restructuring and consumption upgrades, she said.