Testimony in 'Uygur court' given by actors 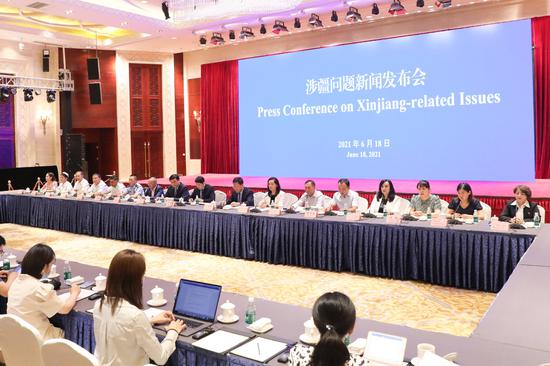 A news conference on Xinjiang-related issues is held in Beijing on June 18, 2021. (Photo/Xinhua)

A public hearing by a "Uygur tribunal" on accusations of so-called genocide in the Xinjiang Uygur autonomous region is illegal and the people who gave "testimony" are just actors, Xinjiang officials said on Friday.

Xu Guixiang, a spokesman for the Xinjiang regional government, said the British tribunal, opened on June 4, was set up by Western anti-China forces and East Turkestan organizations, groups of secessionists advocating Uygur "independence". It has invited a dozen so-called anti-China experts and scholars to prove a nonexistent lie of "genocide" by the Chinese government against the Uygur ethnic group.

"It is simply a shameless act by people who treat the law as child's play," he said at a news conference in Beijing.

The attempt to put the label of "genocide" on Xinjiang can be called the biggest false accusation in human history. Such absurd claims have trampled on international law, interfered in China's internal affairs and seriously hurt the feelings of people of all ethnic groups in Xinjiang, he said.

More than 20 "witnesses" have given their "testimony" at the "hearing", which is beyond common sense and comprehension. Their ability in fabricating and lying has reached its peak, Xu said.

Marhaba Aolan, a professor at Xinjiang University, said: "As a Uygur university teacher, I strongly condemn and oppose the witnesses who have claimed that they have been tortured, abused and sexually assaulted when they were detained in Xinjiang."

She said the tribunal is not a judicial body but a private company registered in the United Kingdom under the name of "Uygur tribunal". Its largest donor is the infamous "World Uyghur Congress", an anti-China separatist organization, she added.

"It has no basis or validity in international law, so any ruling or verdict by the court will only be a piece of useless paper."

Elijan Anayat, another spokesman for the Xinjiang government, said based on the presumption of guilt, this pseudo tribunal fabricated evidence and invited so-called witnesses and victims who are just a few "actors" that have been exposed many times.

Some of the witnesses have relatives or friends in Xinjiang who have been sentenced with crimes including homicide, rape and drug dealing, but they claim that their relatives have been "persecuted" or put in "concentration camps", he said.

"It is unbelievable for some Western countries and international organizations to regard their false stories as evidence and it is also laughable for the court to put the habitual liars as witnesses."

The family members of the so-called witnesses also refuted their claims at the news conference.

Habiba Yimit, wife of one of the witnesses, Mahmut Tawakkul, said his claim that he has been tortured in prison is a complete lie.

Habiba said she had been with her husband every day before he left the country suddenly and he has never served in prison.

Their oldest daughter of their three children had leukemia and the couple took her to Urumqi for treatment. However, Mahmut did not care about the daughter or the family and suddenly disappeared, she said, adding that she learned afterwards that he joined a terrorist group abroad.

"We suffered great difficulty since you left and our life only got better thanks to the government's help," she said. "You abandoned your elderly parents, three children and me."

Marhaba Abdughopur, younger sister of Shamshinur Ghopur, said she was very angry when she heard the absurd claim made by Shamshinur that women in Xinjiang who have given birth to three or more children should have their uterus removed.

"As a gynecologist, I have never seen or heard of that," Marhaba said. "Our parents have eight children and I also have three children. Her fabricated story has never happened in Xinjiang."

The anti-terrorism and anti-extremism efforts made by Xinjiang over the years have borne fruit and the region has not seen any terror attack in four years, Xu said. It is the largest guarantee for human rights, he added.