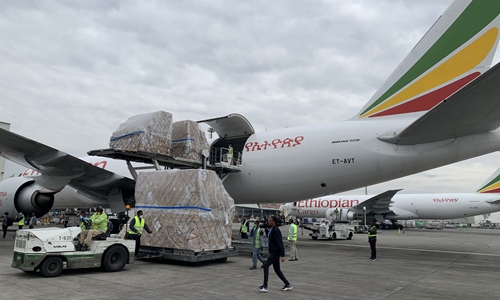 African experts and Chinese doctors who are providing aid in the continent called for more prevention efforts for COVID-19 and further China-Africa cooperation considering the severity of the pandemic and the vulnerable medical systems in several African nations.

On Monday, 1,396 COVID-19 cases in 43 countries had been confirmed on the African continent. Meanwhile, the Chinese mainland had not reported a single domestic case, and only 39 imported cases, bringing the total confirmed coronavirus infections to 81,093.

The total number of confirmed COVID-19 cases worldwide excluding China reached 223,659 on Monday, with the death toll at 11,426.

Although the virus has not hit Africa like it does in Europe, Chinese nationals working on the continent and African experts have warned of its potential challenges.

Many residents have not been following COVID-19 prevention methods. Few people wear face masks, and sub-standard living conditions make it difficult for residents to wash their hands regularly, a Chinese national surnamed Dai, who works in Mozambique, told the Global Times.

Dai returned to Mozambique from China last week, and after landing in the African country, he received a phone call from the local government to collect information.

"I had a health check-up before getting on the plane and taking off. Except for the Chinese and locals who work for Chinese companies, very few people wear face masks," Dai said.

China-Africa expert Cliff Mboya, who is based in Nairobi, told the Global Times that, "There is still very little understanding of the virus in Kenya. The government has mobilized the media, regional governments, and mobile service providers to educate Kenyans on the virus, but people in rural areas most often are left behind as usual."

Mboya said the Kenyan government banned gatherings, crowds, and closed churches, bars, and restaurants, and also asked the police and other security agencies to help enforce the bans.

"I guess the government now has to act tough for people to take these measures seriously because previous measures were not effective," Mboya said.

Mboya suggested the continent should deal with the outbreak from a preventive point of view and said, "once the epidemic gets out of hand, it would be impossible for most African governments to handle it."

Many African nations have shortages in personnel, equipment, medicine, and the ICU beds and oxygen tanks, Cliff said.

Jing Bing, a Chinese doctor in Cameroon who is from Shanxi Province, said they are very anxious as "there has already 56 confirmed cases in the country, and the number will be increasing quickly."

Jing and his colleagues are wearing hats, gloves, and masks for protection and protective equipment is on the way.

The medical conditions in African countries are bad and people lack prevention awareness. Many people do not wear face masks or maintain distance between each other, which may be not good to stop virus transmissions, Jing told the Global Times.

To help Africa deal with the virus, the Chinese government, various companies, and individuals have taken action.

Mboya said that Africa should cooperate and learn from the experiences of China and other Asian countries on how to fight the coronavirus. "Chinese experts, ordinary citizens, and Kenyans in China are sharing their experiences and information to help deal with the situation."

Chinese Foreign Ministry spokesperson Geng Shuang said on Monday that China has paid close attention to the epidemic in Africa and has offered supplies, including test kits, and medical protective gear to various African countries and the African Union (AU). Some supplies have already arrived in Africa.

"China has also organized experts to have video conferences with African experts on sharing the experience as well as promoting prevention work in African countries… China will strengthen efforts on supporting African countries in battling against the virus and coordinating and promoting Chinese enterprise and NGOs to offer support to African countries," said Geng.

An Ethiopian Airlines cargo flight filled with medical supplies donated to Africa from the Jack Ma Foundation and Alibaba Foundation left Guangzhou and landed in Addis Ababa, Ethiopia, on Sunday.

Joyce Chimbi, a reporter from Kenya, told the Global Times that China is also providing extensive prevention and control support to various AU organs, which includes ensuring that information disseminated on COVID-19 is accurate and reassuring to avoid panic.

Chimbi said that Chinese embassies in Africa have encouraged millions of Chinese nationals across the continent to cooperate with local prevention and control efforts.

"African countries have really jumped into action, and are not leaving anything to chance. They have learned great lessons from China. This epidemic can be controlled. When China built a health system targeting the virus, this was encouraging for Africa," Chimbi said.