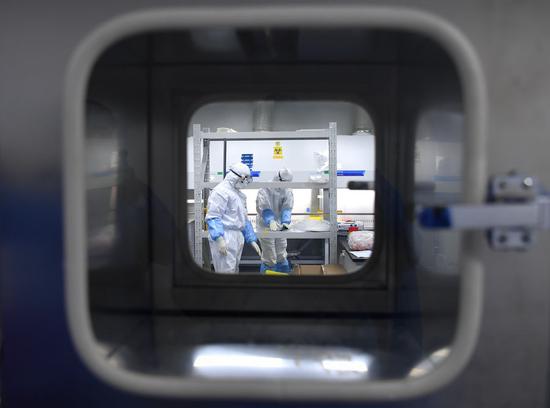 Despite a raft of strict measures to curb the spread of the novel coronavirus, hundreds of daily new confirmed cases are still reported in Wuhan, the epicenter of the outbreak, which was put on lockdown in late January.

The Chinese mainland reported 202 new confirmed cases of novel coronavirus infection on Sunday, down from 573 the previous day, the National Health Commission said Monday. 196 of the 202 new cases in China were reported in Hubei Province, while 193 of the 196 cases in Hubei were in Wuhan, the provincial capital.

Where are Wuhan's new COVID-19 cases from then?

"About 80 to 90 percent of the newly confirmed infections in Wuhan were previously suspected cases," said Liang Wannian, head of the Chinese expert panel on outbreak response and disposal.

"These cases are all under our control," Liang said.

Some new infections are also related to close contacts of the confirmed cases. The China-World Health Organization (WHO) joint expert team said about 1 to 5 percent of close contacts have later been confirmed to have the disease.

As the nucleic acid tests have been expanded to close contacts, some infected people showing no symptoms have been found, said an administrative worker in a quarantine spot in Wuhan.

On Feb. 22, Wuhan said it has conducted nucleic acid tests for all backlogged patients, including those confirmed or suspected to be infected with the virus, close contacts of confirmed cases, and patients with fever.

A total of 40 nucleic acid testing institutions in the city can test an average of 14,000 samples per day, with its daily testing capacity reaching 20,000 samples, said the city's epidemic prevention and control headquarters.

Meanwhile, a considerable number of the recent new cases are asymptomatic infected patients found in special places such as the detention centers, as the city has launched a "blanket search" to leave no coronavirus patient unattended, according to the Wuhan Center for Disease Control and Prevention.

"The number of newly confirmed infections in Wuhan on Sunday hit a new low of 193, and the number of suspected cases has also slipped," said Chen Erzhen who leads a Shanghai medical team to assist Hubei, calling it a "promising change."

Wuhan now has over 5,000 spare beds in 16 temporary hospitals, which were converted from gyms, exhibition centers and other facilities to cope with a shortage of beds amid the outbreak, Ma Xiaowei, director of the National Health Commission, told a press conference Friday.

According to Ma, the daily number of patients discharged from makeshift COVID-19 hospitals, designed for patients with mild symptoms, has greatly exceeded the number of new cases.

The city has so far built 16 public-facility-turned temporary hospitals with more than 13,000 beds, having treated a total of 12,000 patients, or one in every four patients of the novel coronavirus in Wuhan, according to the official.

"About seven quarantine spots in Qiaokou District have been switched into rehabilitation places and the number is expected to grow as more patients recover," said Luo Jun, head of a quarantine spot in the district. As of midnight March 1, 7,250 confirmed COVID-19 cases had been reported in Qiaokou, ranking third among the 13 districts in Wuhan.

More than 40,000 medics from across the country have joined the treatment of COVID-19 patients in the hardest-hit province of Hubei.

As of Sunday, Hubei had reported 67,103 COVID-19 cases and 2,803 deaths. A total of 33,757 coronavirus patients in Hubei have been cured and discharged from hospitals and 26,901 are still receiving treatment in hospitals.

Despite some promising changes, the epidemic situation remains grim and complicated, with great uncertainty and pressure, Liang Wannian said.

"We can't be blindly optimistic," Liang said, adding that Hubei Province and Wuhan are still "the centers of the epidemic."

According to Zhou Jiaxi, a researcher of the Chinese Academy of Medical Sciences, the situation in Wuhan is "fluid," though "the growth of COVID-19 cases is subsiding undoubtedly."

"While the rise has been halted, the overall battle is far from over," Zhou said.

Grid-based management in Wuhan has been running at full speed since Feb. 11, when the city's headquarters for epidemic prevention and control required all residential areas to implement closed-off management.

Wuhan has 8,700 grid-based community workers. Each worker takes care of 300 to 500 households, according to Luo Ping, deputy secretary of the Commission for Political and Legal Affairs of the Communist Party of China Municipal Committee of Wuhan.

Last week, the Hubei provincial headquarters for COVID-19 control stressed all cities, prefectures and counties in the province should continue to implement stringent restrictions on outbound transport channels to resolutely prevent the spread of the virus within and beyond the province.