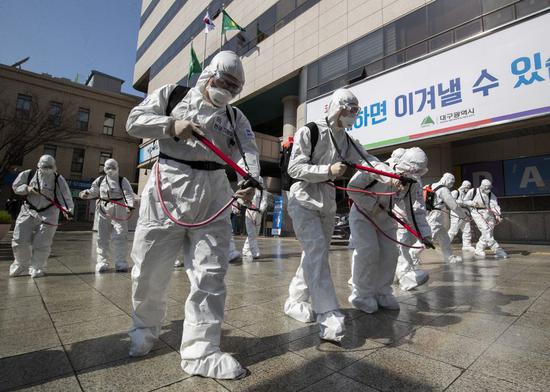 The head of the World Health Organization (WHO) said on Monday that the spread of COVID-19 in South Korea, Italy, Iran and Japan has become the greatest concern.

South Korea has so far reported more than 4,200 cases and 22 deaths, meaning it has more than half of all cases outside China, WHO Director-General Tedros Adhanom Ghebreyesus said at a daily briefing.

The cases in South Korea, however, appear to be coming mostly from suspected cases from the five known clusters, rather than the community, which indicates that surveillance measures are working and the epidemic can still be contained in the country, Tedros added.

"(South) Korea's situation also underlines that this is a unique virus with unique features. This virus is not influenza," Tedros explained, because if COVID-19 was an influenza epidemic, widespread community transmission across the globe would have been expected by now, and efforts to slow it down or contain it would not be feasible.

"But containment of COVID-19 is feasible and must remain the top priority for all countries," he reiterated. "With early, aggressive measures, countries can stop transmission and save lives."

While in Iran, COVID-19 death toll has risen to 66 as of Monday, with a total of 1,501 people having been affected and 291 of them recovered, according to Iran's health authority.

The WHO chief announced Monday that a WHO team had arrived in Iran on Monday afternoon to deliver supplies and support the government in the response.

In Japan, as of Monday, the number of confirmed COVID-19 cases has risen to more than 960, with over 700 of them stemming from the virus-hit Diamond Princess cruise ship quarantined in the port city of Yokohama.