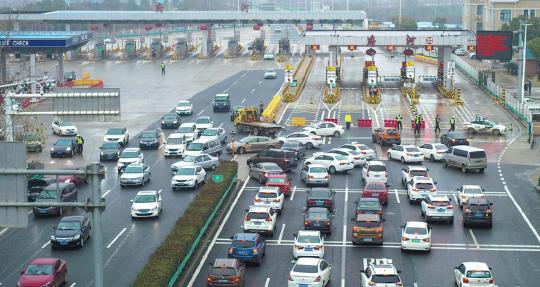 Fuhe Toll Station on the Daihuang Expressway in northern Wuhan, Hubei province, is closed, as the city has been put into lockdown because of the ongoing pneumonia outbreak. (Photo by Yuan Zheng/For China Daily)

Nine officials from Hubei province, including the head of the provincial justice department, have been punished for allowing a released ex-prisoner who had shown symptoms of the novel coronavirus pneumonia to leave Wuhan and enter Beijing on Feb 22.

The woman, surnamed Huang, was later confirmed to have the infection after being driven to Beijing by family members. The case has received wide public attention with people questioning how she could manage to leave Wuhan after the city was locked down and then enter Beijing while showing symptoms of the virus.

A joint inspection team report released on Monday said dereliction of duty played a role and the root problem lay with prison management in Hubei province. The incident has endangered epidemic control work in Beijing, it said.

The case was brought to light after the Xinyijiayuan community in Beijing's Dongcheng district reported a confirmed case of infection on Feb 24. Its residents' committee issued a notice saying a female patient surnamed Huang came to Beijing from Wuhan on Feb 22, and she had had a fever in Wuhan since Feb 18.

The woman was quarantined the day after she arrived in the capital, and three of her relatives had also been under quarantine and medical observation since then, according to the notice.

After the case caused a huge public outcry, a joint inspection team led by the Ministry of Justice went to Wuhan on Feb 27. Disciplinary authorities in Hubei and the Beijing municipal government have launched investigations.

These investigations concluded that officials of the Hubei Provincial Justice Department had shown weak leadership and little awareness of their responsibilities, and they found that the management of Wuhan Women's Prison, where Huang served her sentence, was poor and its decisions conflicted with epidemic control work in the province and nationally.

The investigation also found that the Hubei Prison Administrative Bureau failed to implement the requirements of the province and the Ministry of Justice.

"The prison, which clearly knew that Huang had close contact with other confirmed infection cases and had shown symptoms of fever, failed to report to higher authorities and quarantine her for 14 days as required. Instead, the prison contacted her family members in Beijing and helped her to leave Wuhan in a police car," said the joint inspection team report.

Meanwhile, public security authorities in Wuhan's Dongxihu district were criticized for lapses in traffic control and the identification of people entering and leaving the district, according to the report.

Four authorities in Beijing, including the local community and the city's disease prevention and control center, were also held accountable. The head of the community's parking lot was dismissed, while others involved in the incident were given disciplinary punishments, such as warnings, in line with the severity of their mistakes, according to the investigation by the Beijing municipal government.