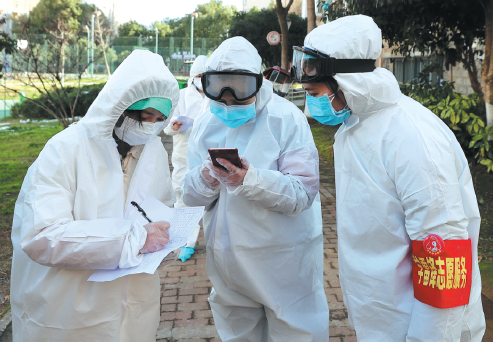 Community workers note the health status of residents in the Fozuling B Community in Wuhan, Hubei province. (WANG JING/CHINA DAILY)

A meeting chaired by Premier Li Keqiang on Monday underlined the key role of communities in epidemic control and prevention and rolled out steps to beef up support and care for community workers.

The meeting of the leading group of the Communist Party of China Central Committee on coping with the novel coronavirus pneumonia outbreak called for unrelenting efforts in containing the contagion, with efforts to step up control and prevention at community level.

It commended community workers for making important contributions to fighting the epidemic and urged local authorities to offer more support for them, said a statement released after the meeting.

Authorities must offer subsidies to the workers during the outbreak and ensure that their injuries or illnesses can be recognized as occupational injuries, the statement said.

The country's outbreak is at a low level generally, except for Hubei province, and the momentum is shifting in a positive direction, the statement said. However, more work must be done to prevent the spread of the contagion and prevent its spread in clusters, it added.

The meeting decided on measures to boost protection for community workers, who will be provided with face masks and protective clothing as necessary.

The meeting called for unremitting measures to contain the outbreak in Hubei and Wuhan, the provincial capital and the outbreak's epicenter.

In cities with frequent population flows, such as Beijing, the authorities, workplaces and individuals must assume their responsibilities to curb the import and spread of the epidemic, the statement said.

Other regions must adjust their level of emergency response based on the actual situation, adopt differentiated strategies and ensure that control and prevention measures are effectively implemented while work and production are resumed, it added.

The meeting also reviewed guidelines on spring farming activities, which called for local authorities to ensure epidemic control in rural areas and spring planting at the same time.

The Chinese mainland reported 202 new confirmed cases of COVID-19 on Sunday, with another 42 people－all residents of Hubei－killed by the outbreak, said the National Health Commission.

The overall confirmed cases on the mainland reached 80,026 as of Sunday, with 32,652 patients still being treated and 2,912 people killed by the disease, the commission said.