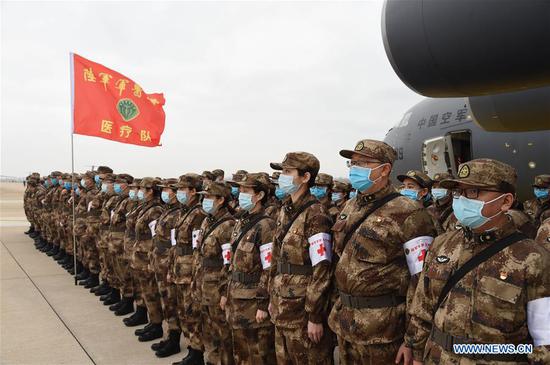 The ongoing novel coronavirus outbreak in China will not affect the Chinese military's combat training and exercises, and the military has comprehensively demonstrated its emergency-response abilities during its fight against the outbreak, a Defense Ministry spokesman said on Monday.

Senior Colonel Wu Qian said at a news conference in Beijing that the People's Liberation Army has maintained the normal routine and training of troops since the outbreak while it also is playing a big part in epidemic control work.

Responding to the call of President Xi Jinping, who is also general secretary of the Communist Party of China Central Committee and chairman of the Central Military Commission, the PLA and the People's Armed Police Force have deployed more than 4,000 medical personnel to join in epidemic control efforts in Hubei province, the epicenter of the outbreak, since Jan 24, according to the ministry.

As of Sunday, three medical facilities in Wuhan that are currently under the military's management — Huo-shenshan Hospital, Taikang Tongji Hospital, and the Guanggu branch of Hubei Maternity and Child Health Care Hospital — had treated 3,467 patients in critical condition, and 689 of them had been discharged after recovering, said Major General Chen Jingyuan, head of the Central Military Commission's Logistics Support Department's health bureau.

Military medical workers had seen 4,450 patients, of which 1,000 had been discharged after recovering by Sunday, he said, adding that no military medics had been infected by novel coronavirus.

Chen said the armed forces have allocated 400,000 medical masks, 8,000 protective suits and other medical equipment to Wuhan. The PLA Air Force has used its transport aircraft to conduct 30 flights to move medics and medical necessities from across the nation to Wuhan.

The PLA Central Theater Command now runs a transportation support team of 130 trucks and 260 personnel to help move daily necessities in Wuhan. The team had transported more than 8,500 metric tons of goods and 23,600 medical apparatuses by Sunday, he said.

Wu, the spokesman, said the PLA pays equal attention to prevention of the epidemic and the combat training.

"Our armed forces have the responsibility to take part in disaster relief, emergency response and rescue missions," he said when asked about some foreign analysts' claims that the contagion is likely to impact the combat readiness of the Chinese military.

"Our military's active participation in the fight against the disease … will not only comprehensively show the troops' emergency-response ability but also hone their operational skills. It could be seen as a combat exercise."

In another development, Wu said many foreign defense departments and militaries have assisted China in helping fight the highly contagious viral disease.

By Saturday, several countries — such as Pakistan, Belarus and Turkey — had used their military transport planes to send medical materials to China, while defense authorities and armed forces in countries including Laos, Vietnam, Cambodia and Singapore had donated funds and supplies to China.

In addition, defense departments or military leaders in countries including the United States, New Zealand, Serbia and Iran have expressed their appreciation and support toward China's counter-epidemic efforts, Wu said.