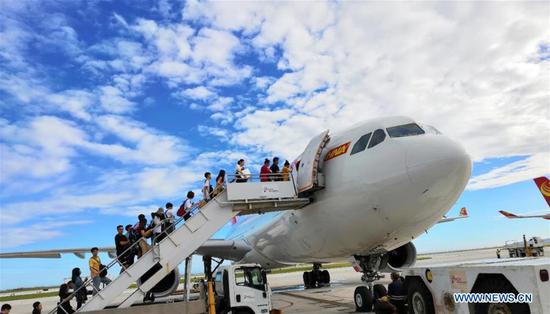 Chinese tourists get on board to fly back home in Saipan, the Commonwealth of the Northern Mariana Islands (CNMI), Oct. 28, 2018. (Xinhua)

The flight took off at 10:44 a.m. Beijing Time from Saipan and landed in Shanghai Pudong International Airport at 3:09 p.m. The second flight is scheduled to depart Shanghai at about 7 a.m. on Monday.

A passenger onboard the flight surnamed Zhou said her original plan of returning on Thursday was disrupted by the typhoon and she had to stay in Saipan for another three days.

"Power and network remained normal. Accommodation was also arranged during the typhoon days," she said. "But still I hoped to return home as soon as possible. And I was grateful that I was among the first group to be picked up by our country's plane."

The Consulate General of China in Los Angeles confirmed Friday that some 1,500 Chinese tourists were trapped in Saipan.

Yutu, one of the strongest super typhoons in history, slammed the islands of Tinian and Saipan Wednesday, bringing sustained winds of 289 kph that damaged local infrastructure. The Saipan airport was also badly damaged.