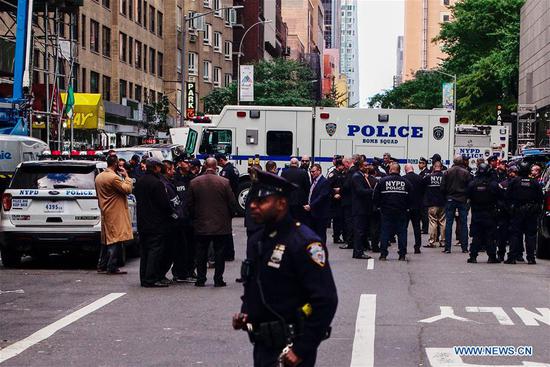 Police officers are seen outside the Time Warner Center where the CNN is based in New York, the United States, on Oct. 24, 2018. A suspicious package was found at U.S. news channel CNN's New York offices on Wednesday, prompting an evacuation of the building. (Xinhua/Li Muzi)

The device, addressed to former CIA director John Brennan, was found around 10 a.m. at the CNN mailroom, prompting an evacuation of the Time Warner Center, where the CNN newsroom in New York is based.

Michell, a mailroom man at the Time Warner Center, said it was his assistant manager who found the package suspicious. The building security called the police immediately after receiving his report.

The device seized by the bomb squad at the CNN offices appeared to be a "live explosive device," and there was a suspicious white powder in the package, New York Police Commissioner James O'Neill said.

Jim Higgins was in a conference that gathered 1,200 people in the Time Warner Center building when told to evacuate.

"Everyone got up in an orderly fashion and evacuated two floors we were on...in five minutes," recalled Higgins in an interview with Xinhua. "I don't think anyone really knows what was going on till we get out."

The incident came hours after the U.S. Secret Service said it intercepted the suspicious package intended for Obama early Wednesday while the package addressed to Clinton was intercepted late Tuesday.

A number of other suspicious packages were also discovered. One apparently intended for Eric Holder, former U.S. Attorney General, was misaddressed and was ultimately delivered to the district office of Congresswoman Debbie Wasserman Schultz in Florida because her name was on the return address, according to media reports.

Police in Sunrise, Florida, said the building that houses the office of Schultz, the Democratic National Committee chair from 2011 to 2016, was evacuated after the suspicious package was discovered in the mail.

Moreover, a package addressed to Representative Maxine Waters was reportedly intercepted at a congressional mail facility in the U.S. state of Maryland before going to Capitol Hill.

The wave of suspected explosive devices came after a similar device was found in a mailbox at the home of billionaire investor and major Democratic donor George Soros in Bedford, state of New York.

None of the devices injured anyone. The identity and motivation of the perpetrator was unclear.

Bryan Paarmann, the FBI Special Agent in Charge of the counterterrorism task force in New York, said it appears a person or persons sent out multiple packages.

The investigation was in early stages and part of a group effort, he said.

A Washington Post/Schar School Poll published Tuesday found that in 69 of the most contested House of Representatives districts in the country, 50 percent of voters back Democratic candidates and 47 percent throw their support for Republicans.

The incidents drew more attention as the recipients of the packages are high-profile Democrats or Democratic supporters, as many analysts noted.

Many U.S. officials are condemning the acts as terrorism at home.

President Donald Trump, speaking at an opioids event at the White House on Wednesday, said "the full weight of our government" is deployed to investigate the packages, pledging to "bring those responsible for these despicable acts to justice."

"Acts and threats of political violence have no place in the United States of America," he said. "We're extremely angry, upset, unhappy about what we witnessed this morning and we will get to the bottom of it."

New York City Mayor Bill de Blasio called the explosive device sent to the CNN offices "an effort to terrorize" and "an act of terror attempting to undermine our free press."

De Blasio told a news conference that it was an ongoing investigation and there was no credible threat against New York City at this time.

Cuomo said there will be a heightened police presence following the incidents but urged citizens not to be alarmed.