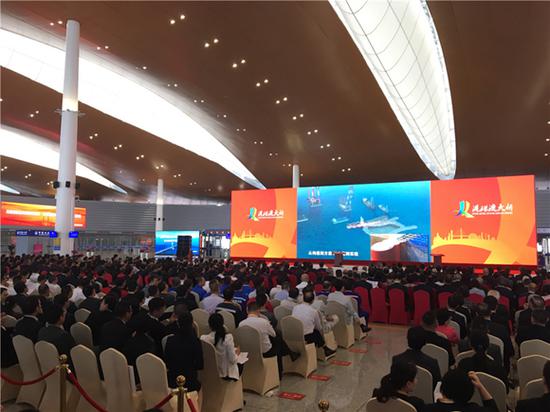 The attendees of the Hong Kong-Zhuhai-Macao Opening Ceremony wait patiently in their seats as the event will soon begin Tuesday morning. [Photo by He Shusi/China Daily]

Leading officials from Guangdong and the Hong Kong and Macao special administrative regions attended the 9 am ceremony, which takes place at the passenger clearance building of the Zhuhai Port.

There were hundreds representing the roughly 50,000 construction workers and engineers from the Chinese mainland and Hong Kong and Macao SARs who built the mega bridge, including leading engineers and designers.

Representatives of bridge operators from the three cities also attended the grand opening. These include HZMB Authority, immigration and customs officers from the ports in Zhuhai, and in the Hong Kong and Macao SARs.

The 55-kilometer bridge-island-tunnel complex, the first sea span across the Pearl River Estuary linking its west and east banks, becomes the premier sea-crossing in the world.

The bridge is the result of five years of feasibility research and another nine years of construction. The mega cross-boundary complex officially opens to traffic at 9 am on Wednesday.

Looking ahead, the bridge is expected to strengthen trade, financial collaboration, logistics and tourism among the three places.

It will bring residents in Hong Kong, Macao and Guangdong within a "one-hour living circle", which is expected to attract more visitors to the Guangdong-Hong Kong-Macao Greater Bay Area.