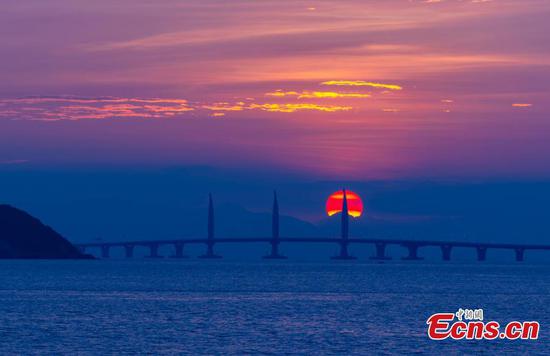 After eight years of difficult construction, China's much-anticipated Hong Kong-Zhuhai-Macao Bridge (HZMB) is slated for traffic operation on the upcoming Wednesday. The 55-kilometer bridge, crowned one of the "seven wonders of the modern world" and "Mt. Qomolangma" in the field of bridge construction, is one of the world's most challenging megaprojects.

"The construction scale and difficulty of the HZMB is the biggest, compared to other existing cross-sea bridge-tunnel transportation cluster projects," said Su Quanke, chief engineer of the HZMB Authority.

With the devotion of over 200 R&D institutions and thousands of sci-tech personnel, the project has been granted over 1,000 patents, pushing the boundaries of possibility over and over again.

Bridge, island and tunnel, all integral

The world's longest sea-based project comprises four parts, including a 22.9-kilometer steel bridge, two artificial islands, a submerged sea tunnel extending for 6.7 kilometers at a depth of 40 meters, as well as leading bridges that connect the bridge to the cities.

For a bridge project, designers prefer to build all the structure on the ground, and only opt to tunnel when there is no alternative.

However, for the HZMB, the most feasible design is to integrate bridge, island and tunnel to form a complete cross-sea channel.

"The Pearl River Estuary holds a world-level shipping channel where around 5,000 vessels get through at its busiest time of the day. Smooth traffic should be guaranteed. And the location is near the Hong Kong International Airport. With about 2,000 flights taking off and landing at the airport, the bridge cannot be built too high for safety reasons," said Meng Fanchao, chief designer of the HZMB project. "But you cannot have a submerged sea tunnel without any support. That forced us to build the artificial islands."

Chinese engineers blazed a trail in installing deep-immersed tunnel tubes. "There is no model for us to refer to as all the cases are shallow-buried tubes," said Su.

"Due to lack of experience, the installation of the first tube lasted for 96 hours, and we did not take a rest for four days and five nights," said Yin Haiqing, deputy manager of the Project Management Department for Island and Tunnel. "Everyone was exhausted when we made it."

The 6.7-kilometer tunnel is the world's longest submerged sea tunnel.

Different from traditional island reclaimed from the sea, the engineers "put 120 steel cylinders with 22-meter diameter into the seabed, make out the shape of an island, and fill the island with soil," Su said, introducing the innovative way they adopted to build the artificial island, saying it was firmer, more efficient and friendly to the marine ecology.

The HZMB is formed of box girders, amounting to 420,000 tons of steel – roughly the weight of 60 Eiffel Towers or 10 Beijing National Stadiums (the Bird's Nest).

Many of the steel components, such as the piers, pylons and immersed tubes, were made by China's large self-developed equipment, and then shipped to the construction site. Assembling the precast components is just like building blocks, but with much more difficulty.

The constructors even spun a steel pylon with a height of 160 meters and a weight of over 3,000 tons at 90 degrees above the sea, an unprecedented practice in the history of the world's bridge construction.

"Such an integrated design would not have been possible if the country's overall research capability and equipment level had not advanced to the current level," said Su.

The designers made another breakthrough in the lifespan of the bridge. Bridges in China are usually designed to serve for no longer than 100 years, and the sea environment will largely shorten the lifespan of architectures due to high humidity and salinity.

To address the problem, the designers used new materials and new technologies like concrete reinforcement and rust resistance.

They also applied fire prevention and accident rescue facilities for the bridge. The designers built an experiment platform for the submerged sea tunnel to conduct combustion tests of vehicles. Three years of experiments show that the fireproof facility can ensure that the immersed tubes won't be destroyed for two hours under 1,200 degrees Celsius.

The artificial island also has a marine rescue platform, which will send a rescue team within three minutes to the tunnel and five to seven minutes to the bridge if an accident happens.

"The megaproject is also the best place for the application of China's latest technologies," said Su. "We hope more large projects can play their roles in leading the transformation and upgrading of China's manufacturing."