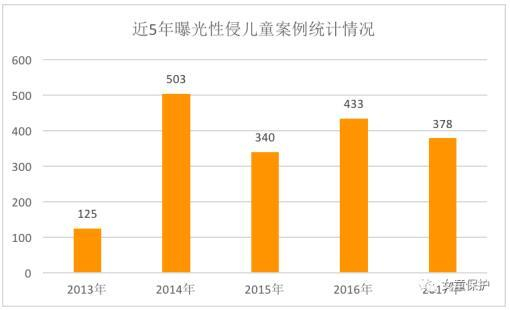 The number of sexual assault reported from 2013 to 2017 according to China Foundation of Arts and Culture for Children. /Screenshot via Wechat

The city of Hangzhou in east China’s Zhejiang Province has announced regulations to protect minors (aged under 14) from in-school sexual harassment, the first-of-its-kind in China that targets sexual assault in k-12 schools, Hangzhou Daily reports.

The People’s Procuratorate in Hangzhou’s Xihu District and the local bureau of education jointly released a document on August 6 which detailed a number of procedures and policies on how the system against on-campus sexual harassment involving minors should be structured.

On reporting sexual assault cases, the document stresses that delayed reports, or attempts to keep quiet suspected cases, as well as private mediation are not allowed by schools.

It also states teachers are forbidden to engage in any form of intimated sexual relationships with students, including various forms of sexual harassment.

For students who fall victim to sexual assault, the document requires schools to provide appropriate counseling for mental health, legal assistance and other adjustments in the classroom if needed. Meanwhile, schools should host regular lectures to inform students on regulations and policies regarding sexual harassment.

Many are suggesting other cities and provinces in China should adopt similar rules to alert more schools to ensure the safety of their students.

"Hangzhou is miles ahead of other cities on this front. These regulations should be implemented nation-wide", Weibo user @Woyeyoutiantan and @Nonglisiyue commented.

Others are calling for the mechanism to be employed by Chinese universities, where sexual assault is more pervasive than it is in k-12 schools, according to online surveys, and similar system needs to be established to address bullying and micro-aggression in schools.

The number of sexual assault cases against minors is strikingly high according to a survey released by China Foundation of Arts and Culture for Children. In 2017, a total of 378 cases of sexual assault against children aged under 14 was reported. Though lower than 2016, the data still shows on average that at least one incident still occurs every day.