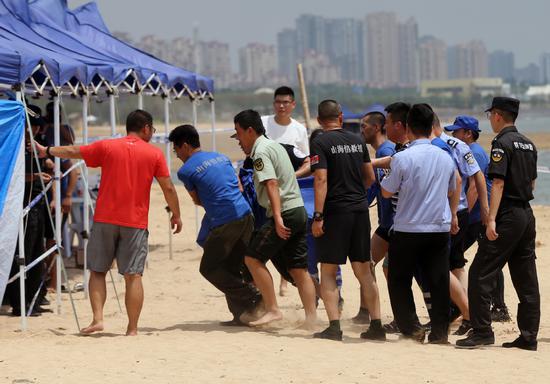 Rescuers escort the body of an 8-year-old girl who drowned with her twin sister in Qingdao, Shandong Province. The girls, who traveled with their mother from Beijing, went missing on Sunday afternoon while they were playing on a beach in the city's Huangdao district. (Photo provided to China Daily)

Police in Qingdao, Shandong Province, confirmed on Monday that 8-year-old twin girls who traveled from Beijing had been found drowned.

The twins - Pei Yuanjin and Pei Yuantong, according to reports - had come to the coastal city with their mother, surnamed Sun, for a holiday.

A rescue team found the body of the elder twin around 11:30 am and the other at 3:45 pm in waters near the place the girls were reported missing.

The mother said she lost sight of the girls on a beach in the city's Huangdao district around 3 pm on Sunday as they were having fun digging in the sand just meters away from her. They were wearing swimming suits and had bare feet.

The mother said she would check her mobile phone from time to time as the girls were playing, but she looked up at some point and found that the girls were missing. After almost an hour of searching, she called the police.

Local police, nongovernmental rescue teams and volunteers launched a wide search for the missing girls at 5:30 p.m. on Sunday.

At least eight lifeboats were dispatched into the water. They were joined by three fishing boats. Ambulances were ready, drones were employed and divers searched underwater. The police also reviewed their surveillance system in the search for clues.

The twins' deaths drew wide concern on social media, with many comments warning of possible dangers. Some social media users, who seemed familiar with tidal currents in Qingdao, said the sea often ebbs at the time the twins vanished, and people can be carried off easily by the current.

Drowning cases are known to increase in the summer months, especially in rural regions where rivers and pools are unpatrolled and children are often allowed to play unattended.

On Friday, a 40-year-old mother went swimming with her son, daughter and two nephews in a section of the Yangtze River in Huangshi, Hubei province. All of them vanished. Five bodies were found a day later, Chutian Metropolis Daily reported.

On July 30, five boys from Miyi county in Panzhihua, Sichuan province, were found drowned in a pond, local police said.

Guangming Daily reported that more than 20 adolescents were drowned in 10 days from June 25 to July 4. The article blamed parental negligence and lack of supervision.