Can sturgeon be saved? It depends. 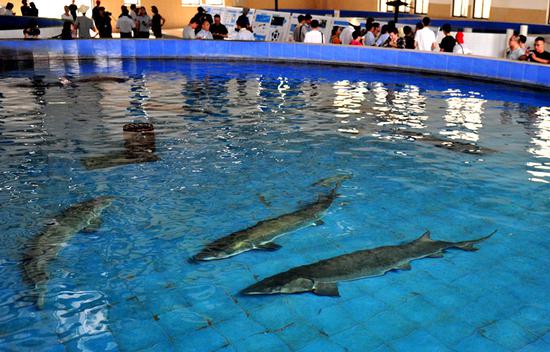 Researchers dedicated to protecting the endangered Chinese sturgeon, one of the oldest of fish species－often referred to as the "panda of the water"－have benefited from modern technology in restoring the sturgeon's population in recent decades.

The Chinese Sturgeon Research Institute, located in Yichang, a city in Hubei province beside the Yangtze River, has reintroduced more than 5 million Chinese sturgeon of various sizes into the waterway since 1984, according to Li Zhiyuan, the institute's deputy director.

Historically, the Chinese sturgeon, a species 140 million years old, lived wild in the Yellow, Yangtze and Pearl rivers. Now it's endangered－found only in the Yangtze.

The species, which can grow up to 2 meters long and live as long as 60 years, has been under State protection since the 1970s.

The research institute was founded in 1982 by Three Gorges Group, a hydropower development corporation.

Li said it has since become an innovation platform for the group's ecological and environmental protection work.

The facility has dozens of pools holding Chinese sturgeon, from infants to adults, and has been using artificial breeding techniques to grow the population.

He said the species became endangered as a result of overfishing, water pollution, shipping interference and sand dredging in the Yangtze, and added that the degraded environment remains the greatest challenge to the species' restoration.

"Even though we release artificially bred Chinese sturgeon every year, we can't guarantee they will all survive," Li said.

However, once the water quality in the Yangtze is improved through ongoing conservation efforts, artificial breeding is expected to play a major role in recovering the species.

In recent years, Chinese sturgeon released into the wild have been tagged so they can be tracked and monitored.

"With these technologies, researchers can recognize them and collect data, such as genetic patterns," Li said.

Experts suspect the phenomenon is related to hormones contained in chemical pesticides and to industrial pollutants released along the river.

"We deliberately release more male sturgeon into the river," Hu said, adding that the institute has also looked into single-sex reproductive technology.

However, Li said, despite the technological support, the fate of the Chinese sturgeon will ultimately depend on the river's water quality.

"The sharp deterioration of the Yangtze's ecology and environment is the result of human activities. Therefore, we must shoulder our responsibility to restore the river," he said.

Biologically, the Chinese sturgeon is a "flagship species" for the river－serving as an ecological indicator－Li said. If the balance is damaged, he said, it will cause a butterfly effect in the ecology.

The Yangtze is an ecological treasure trove. It is home to about 400 species of aquatic life, among which about 150 are endemic to the river.