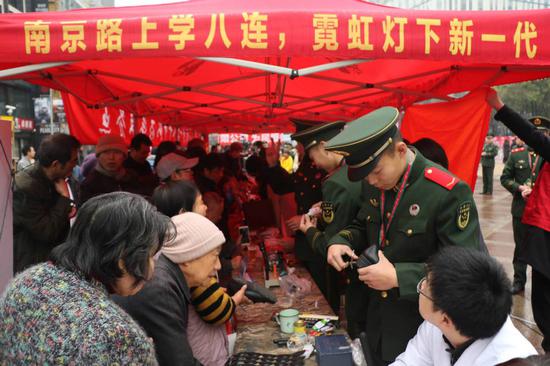 "They never know how detailed the questions asked by the visitors might be. Also, since November, the number of visitors has nearly tripled after General Secretary Xi Jinping and six other members of the Standing Committee of the Political Bureau of the CPC Central Committee visited the memorial."

An increasing number of soldiers are choosing to volunteer as site guides, with all needing a good command of history, languages and communication skills. Wu Ming gave up an opportunity to study film and drama at the University of Iowa in the United States to join the Army. He can recount Party history in English, while another volunteer guide, Lu Yuan, can speak Japanese.

To make serving as a soldier in China a respected profession is part of what Xi put forward during the 19th CPC National Congress in October. Soldiers with the People's Armed Police Force in Shanghai aim to achieve this goal by making greater contributions to the people, in addition to enhancing real combat readiness.

On the 20th of every month, squad members have been volunteering since 1982 to provide free haircuts, shoe and umbrella repairs, blood pressure screenings and scissor sharpening, as well as patching up old clothes.

"The service now covers medical and legal advice, psychological counseling and 20 other services, for both Chinese and foreigners," said Wang Hao, the squad leader. Over 130 companies have participated in the services, along with thousands of volunteers.

The squad also helps elderly residents living alone, autistic children and people with disabilities on weekends, and has donated more than 3 million yuan ($452,400) to public foundations and charities since 1982.