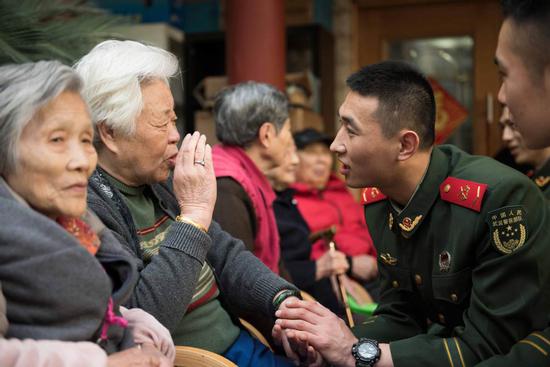 Members of the squad talk with residents of a nursing home in Shanghai during a regular visit. (ZHANG HAI/FOR CHINA DAILY)

Fellow soldier Zhu Tianwei, a guide at the memorial hall at the site of the CPC's Second National Congress - held in Shanghai from July 16 to 23, 1922 - said he was given an old copy of the Party's Constitution by his grandfather when he left home to join the Army years ago.

"Now it's thrilling that I'm telling the story of the Constitution to people visiting the memorial," he said. "I love the country I serve even more deeply after knowing more about its history."

Wang and Zhu, along with 13 other volunteer guides from the squad, serve on a rotating basis at the two historical sites. They typically serve in the role for 15 months, two days a week.

"New era thought has added new understanding to soldiers' service to the country and its people, which embraces defending national interests and safety as well as meeting people's changing demands in life," said Wang Changsheng, the squad's instructor.

"Being close to the sites of the CPC's first and second national congresses, our squad has regarded the two memorials as great resources to resolutely implement the Party's thinking on strengthening the military for the new era and enhancing the political loyalty of the armed forces."

The First National Congress was held in Shanghai's Xintiandi area and marked the birth of the Party, now the world's largest political party with more than 89 million members. In 1952, the venue was made into a memorial hall and opened to the public.

In October 1998, a six-month renovation of the site of the CPC's first national congress began, with plans to extend the memorial from 485 to 780 square meters. The squad, at the request of the memorial's library, appointed 30 soldiers to support the construction of the site and accelerate renovation. However, after the site was significantly enlarged, more guides were needed.

"We wanted to do more for the site," said Guo Fengjue, who was with the Shanghai squad at the time and encouraged all soldiers helping with the renovation to apply to be volunteer guides in May 1999.

Ni Xingxiang, then curator, worried that applicants without formal education would not be qualified to be guides. After being tested on Party history and communication skills, Guo became the first docent in 1999. Nearly two decades later, Guo is one of several former soldiers who volunteer as guides at the two memorials.

"Soldiers need to continuously learn and update the history of the Party and take tests regularly to polish their communication skills," said Yang Yu, vice-curator of the First National Congress memorial hall.