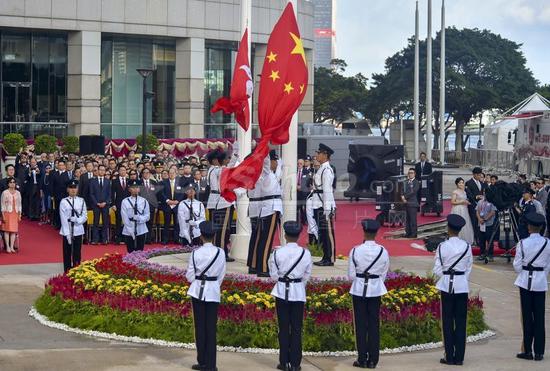 A flag-raising ceremony on Sunday at Golden Bauhinia Square in Hong Kong marks the 21st anniversary of the city's return to the motherland. (Photo/China News Service)

One year ago, President Xi Jinping called upon the people of Hong Kong to redouble their efforts, leverage their strengths and build their economy under "one country, two systems". His remarks have energized and reinvigorated the special administrative region, as the city has boasted a banner year ever since.

Since the president's inspection tour on June 29 through July 1 last year, Hong Kong has experienced steady economic growth. The polarization that divided the city is now less fractious, and the SAR has achieved even greater integration with the Chinese mainland. There are also new initiatives to help the people of the city, especially the young, to achieve their hopes for a better future.

Xi promised the central government's firm support as he set out his vision for Hong Kong's development, marking the 20th anniversary of the SAR's return to the motherland. Today, government officials, the business community, emerging entrepreneurs and university students concur that the president's encouragement has brought about important advances in Hong Kong's progress.

The city's GDP increased by 3.8 percent in 2017, and registered 4.7 percent growth in the first quarter of 2018. The 2.8 percent unemployment rate from February to April this year was the lowest in two decades.

During the past year, Hong Kong has signed free trade agreements with Georgia and the Association of Southeast Asian Nations, advancing the city's significant role in the Belt and Road Initiative.

Aron Harilela, chairman of Hong Kong General Chamber of Commerce, said businesses in the city are ideally placed to capitalize on these developments, particularly within the Guangdong-Hong Kong-Macao Greater Bay Area. The chamber's regular business missions to the Greater Bay Area have shown that the initiative is already having an impact. Cities within the cluster, some of them hubs for technology and advanced manufacturing, are eager to work closely with their neighbors for mutual progress, Harilela said.

The Ministry of Science and Technology and the Ministry of Finance, as a result, announced that Hong Kong's universities and other scientific institutions may apply directly for funds from the central government. The funds, previously available only on the mainland, may now be used in Hong Kong.

The president's directive offers insight into the great importance the central government attaches to Hong Kong talents and potentialities in science and technology.

It also gave a "shot in the arm" to the city's development, said the special administration region's Chief Executive Carrie Lam Cheng Yuet-ngor.

In its 2018-19 budget, the HKSAR government set aside HK$50 billion ($6.37 billion) for innovation and technology development. An interdepartmental Steering Committee on Innovation and Technology, led by the chief executive, also was established.

In addition, the Technology Talent Admission Scheme, a three-year pilot program that kicked off on June 25, offers a fast-track on visa applications from global talents.

Additional resources have been invested in the city's innovation-technology industry, as outlined in Lam's first Policy Address, delivered in October. Hong Kong already is recognized for its sound technological foundations and outstanding capability in scientific research. Lam acknowledged at a recent summit that this success may be credited to the cooperation among top universities, research institutes and high-quality talents from around the world.

Combining the unique advantage of "one country, two systems", the vast mainland market, and support from the central government, Hong Kong is predicted to evolve into a world-class innovation-technology hub and smart city, Lam added.

Another area that Xi particularly emphasized during his inspection tour last year, was to provide greater convenience for Hong Kong people to study, work and live on the Chinese mainland.

In August and December, the Hong Kong and Macao Affairs Office of the State Council announced two sets of measures easing the path for Hong Kong people on the mainland in education, employment, business and travel.

Probably the most timely and important measure is the phasing out of the employment permit requirement for Hong Kong people working on the mainland, said Kuo Waikeung. Kuo is a Hong Kongborn entrepreneur, operating a startup in Qianhai, a free trade zone in Shenzhen. Qianhai is the first area to implement the new policy.

A two-year employment permit had been required of residents from the Hong Kong and Macao special administrative regions and Taiwan since 2005.

Kuo said the change meant his company's Hong Kong employees no longer need to extend their work permits when their contracts expire. The time it takes to recruit new employees from Hong Kong has been reduced by "at least two months".

Another central government policy, giving Hong Kong and Macao people equal access to the mainland's housing fund, has also been implemented in Qianhai, Shenzhen, according to Witman Hung Wai-man, a Hong Kong deputy to the 13th National People's Congress.

Exchanges with the mainland and greater exposure have become more frequent and intensive for Hong Kong's youth. Through internships and guided tours, young people gain greater knowledge of the country's development.

Andy Tsang Hin-lam, a freshman history major at the Chinese University of Hong Kong, joined a youth delegation in late June, and visited Shenzhen, Wuhan, Hubei province, and Beijing. Tsang said he was "surprised" and "inspired" by the rapid development of technology on the mainland.

"Hong Kong's development has always pulled at my heartstrings," Xi said when he arrived in Hong Kong on June 29 last year. In a series of speeches Xi delivered during his inspection tour, he emphasized the importance of setting aside differences to find common ground and unite for the greater good of the city's future.