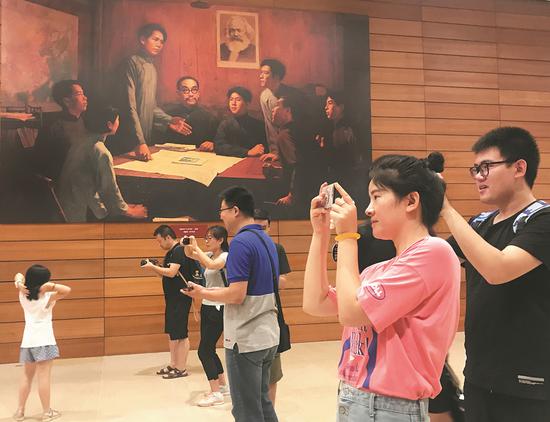 Faculty from Hebei University's College of Chemistry and Environmental Science, organized by the school's Party committee, visit an exhibit at the National Museum of China in Beijing on Sunday to mark the Communist Party of China's 97th birthday. (XU JINGXING / CHINA DAILY)

CPC works for people as it boosts vitality, discipline on constant basis

The Communist Party of China, which celebrated its 97th birthday on Sunday, has kept its vigor and vitality as the world's largest political party through continuous Party building efforts.

Xi Jinping, general secretary of the CPC Central Committee, said on Friday that the CPC must regard political building as the Party's fundamental way of growth to provide an important guarantee for the Party to march from victory to victory.

"If a Marxist political party loses its advanced nature in politics, there will be no purity and advanced nature of the party," Xi said when presiding over a group study session of the Political Bureau of the CPC Central Committee.

The Political Bureau conducted the group study to deepen understanding of the Party's political building and become more conscious and firm in promoting it to celebrate the 97th anniversary of the CPC's founding, Xi said.

"Our Party was born during domestic turmoil and foreign aggression and has grown after enduring hardships and frustrations, and it becomes stronger by overcoming risks and challenges," Xi said, noting the Party has always been ready to protect against potential dangers and risks.

The number of CPC members reached 89.56 million by the end of last year, of whom 13.31 million were younger than 30, according the Organization Department of the CPC Central Committee, which released statistics on Saturday.

CPC membership increased by 117,000 and Party organizations by 53,000 since 2016. The Party's vigor and vitality have been strengthened, the department said.

The growth rate of CPC membership has remained under 1.5 percent since 2013, when the Party implemented a recruitment rule that focuses on the quality of members.

Starting this year, China has launched a massive institutional reform touching on a wide range of Party and State entities to enhance the Party's leadership and long-term governance.

He Yiting, executive vice-president of the Party School of the CPC Central Committee, said the CPC reform was a political advantage of the country's much-heralded "socialism with Chinese characteristics".

"We have seen lots of political parties with glorious pasts that have failed to break the historical cycle of gaining political power only to lose it."

"The reason lies in the ignorance of their own faults," He said. "It is easier to launch revolution against others than against oneself."