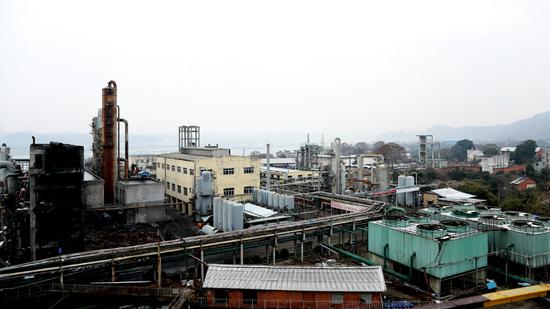 The Tiantian Chemical Plant in Yichang, Hubei province, in January. The facility is pictured after it was closed in response to a plan formulated by the local government to regulate chemical plants along the Yangtze River. （Photo provided to China Daily）

The 11 provinces and municipalities along the Yangtze River Economic Belt have seen some improvement in pollution control and ecological quality, but environmental challenges remain serious, according to an audit released on Tuesday.

In an effort to promote the protection of the river's ecosystem, the National Audit Office has audited the implementation of environmental protection policies of the 11 provinces and municipalities - including Hubei and Zhejiang provinces, and the municipalities of Chongqing and Shanghai - in the past two years.

The report said the amount of urban sewage treated in the area has increased by 8 percent, and treated rubbish has climbed 11 percent over the past two years. Some 97,800 cases involving dumping and discharging pollution, or deforestation, have been dealt with, it said.

However, problems are still severe. By 2017, there were 24,100 small-scale hydropower stations in the area, and the shortest distance between two stations was just 100 meters, the report said.

Li Feng, director of the Resources and Environment Audit Department of the NAO, said that because of the small investment required and quick returns, the stations play an important role in providing electricity and boosting local economic development.

"However, the audit found that some places put too much emphasis on economic benefits and paid insufficient attention to ecological protection, resulting in a negative impact on the environment," he said. "The main problems are the density of construction, and in some places starting construction without passing environmental reviews."

The water quality of the five major lakes along the Yangtze, including Poyang and Dongting lakes, still do not meet the standard for drinking water, the report said.

"Lake management is a complex and long-term job," Li said. "Lake bodies and their tributaries are not well managed, and the accumulation of pollution has been going on for a long time, so the water quality hasn't improved much."

In the past four years, there have been 346,000 cases of illegally using electrical charges for fishing, including 149 in reserves for rare fish. Thirty people have been electrocuted in the water during that period.

Auditor Luo Tao said the issue reveals a defect in the responsibility system for environmental protection.

Li said related departments are now making corrections based on the audit results.

Wang Liyan, a professor at the Guanghua School of Management at Peking University, said it is necessary to provide strong and effective audit supervision and consultation, and to take a stand for the healthy development of the Yangtze River Economic Belt.

Experience gained there can be of benefit in building an ecological civilization in the country, he said.