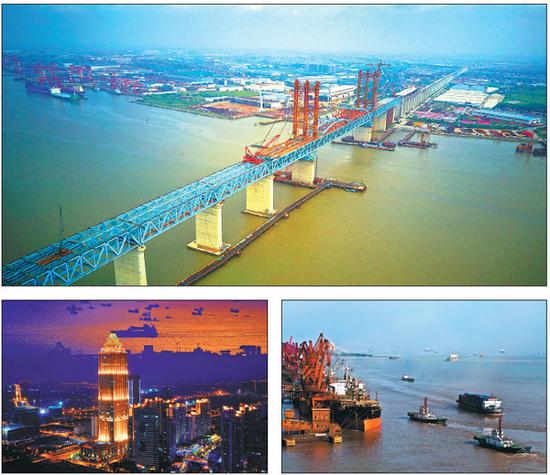 Clockwise from top: The Shanghai-Nantong Bridge under construction. Ships carry goods near a wharf in Nantong. The city shines in the foreground of the Yangtze at night. (Sun Jian/For China Daily)

Authorities from Shanghai and its three neighboring provinces of Zhejiang, Jiangsu and Anhui agreed on Friday on a three-year action plan for the integrated development of the Yangtze River Delta and nearly a dozen collaborative projects to increase the region's competitiveness on a global scale.

The agreements, signed at the 14th symposium of the main leadership of the Yangtze River Delta, indicated that by 2020, the region aims to become a national demonstration zone for new development concepts, a world-class urban center and an Asia-Pacific gateway for global resource allocation.

To achieve that, the three-year strategic plan (2018-20) for the region's development has been formulated to clarify the tasks, timetable and road map for the coming years, Li Qiang, Party Secretary of Shanghai, told the media on Friday evening.

With a GDP of 19.5 trillion yuan ($3.08 trillion) last year, the Yangtze River Delta－which is at the convergence of the Belt and Road Initiative and the Yangtze River Economic Zone－accounted for roughly 25 percent of the nation's GDP, official statistics show.

In a previous interview in January, Li said "we have reached a point when the regional cooperation of the Yangtze River Delta region must be deepened comprehensively" as "regional collaboration represents a general trend in the development of the world economy".

However, differences in detailed planning for Shanghai and Jiangsu, Zhejiang and Anhui provinces in aspects such as industrial development and policies on residents' livelihoods, have hindered some collaborative projects, Li said at a panel discussion during this year's National People's Congress in March.

Dozens of dead-end roads between the provinces and the municipality because of existing residential communities or rivers are one example.

The formulation of the three-year plan signified that the integrated development of the region has made substantial progress, and Shanghai will play a strategic role as a world-class core city, Li said.

Based on the plan, 11 cooperation projects were also signed on Friday to facilitate coordination and links in areas such as planning, reform, innovation, urban facilities, transportation networks and public services.

"The three-year plan has indicated a new consensus and clarified new tasks on the integrated development of the region, based on which we are committed to the completion of one project after another to make the vision we've jointly painted a reality," Li said.