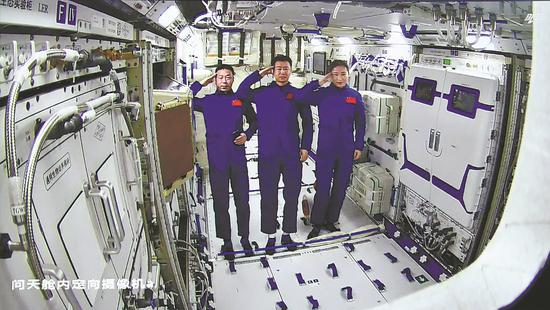 The Shenzhou-14 taikonauts, who are aboard the Tiangong space station, gave an off-Earth salute to all participants in China's 30-year manned space program on Wednesday.

In a celebratory video message released by the China Manned Space Agency, taikonauts Chen Dong, Liu Yang and Cai Xuzhe raised their right hands to their heads, expressing their appreciation for the country's accomplishments in human space exploration.

"We pay the highest respect to veteran leaders, experts and all staff members who have made outstanding contributions to the project over the past 30 years," Chen, also the crew commander, said in the video.

The three taikonauts were also seen stamping a commemorative envelope, which is printed with an image of the T-shaped space station that China aims to finish building by the end of 2022.

China approved its manned space program on Sept. 21, 1992. After three decades of endeavors, the country will soon complete the in-orbit construction of its first-ever space station, with the last major component, the Mengtian lab module, scheduled to be launched in October.