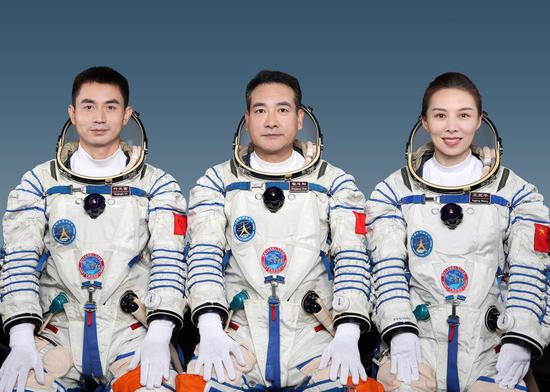 Chinese astronauts Zhai Zhigang (C), Wang Yaping (R) and Ye Guangfu will carry out the Shenzhou-13 spaceflight mission, and Zhai will be the commander, announced the China Manned Space Agency at a press conference on Oct. 14, 2021. (Xinhua)

Zhai Zhiguang, Wang Yaping and Ye Guangfu, the Chinese astronauts to live and work for six months in the country's under-construction space station, made their public debut as a crew on Thursday at the Jiuquan Satellite Launch Center.

The Shenzhou-13 spaceship will be launched at 12:23 a.m. Saturday (Beijing Time) from the Jiuquan Satellite Launch Center in northwest China, announced the China Manned Space Agency (CMSA) at a press conference.

The trio will stay in orbit for six months, which will be a regular duration for following Chinese astronauts to work and live in the space station, said Lin Xiqiang, deputy director of the CMSA.

Zhai, who performed China's first spacewalk in the Shenzhou-7 mission in 2008, will be the commander of the mission.

Wang, who attended the Shenzhou-10 mission in 2013, will be the first Chinese female astronaut to visit China's space station and carry out extravehicular activities.

Ye is a newcomer to space. He was selected to join the second batch of Chinese astronauts in 2010 and made his first public appearance after completing a European Space Agency's (ESA) underground training mission in 2016.

Currently, the two cargo crafts, namely Tianzhou-2 and Tianzhou-3, are docked at the two ends of the Tianhe core module to form a linear shape, waiting for the arrival of Shenzhou-13 crew members.

It has been 13 years since Zhai participated in the Shenzhou-7 mission. He has been dedicated to training and maintained high expectations for his new mission.

"My love for flying, my love for my profession, and my love for the aerospace industry of my motherland have been inspiring me," said Zhai when meeting the press Thursday.

Wang earned the title of China's first space teacher after delivering a televised science lecture to an audience of over 60 million schoolchildren during the Shenzhou-10 mission in 2013.

She confirmed on Thursday that she will give a new lecture during the Shenzhou-13 mission, encouraging Chinese students to bring up what they want to know about space.

Wang also revealed that it will be the first time for Chinese astronauts to celebrate the Spring Festival in space, and they will unpack special packages for the traditional Chinese holiday.

When asked about the experience of CAVES at the press conference, Ye said exploring the space and building a space home are the common mission and pursuit of all astronauts. "I am looking forward to meeting with my international counterparts in space and wish they can pay a visit to China's space station as a guest."

According to the CMSA, the upcoming Shenzhou-13 mission will include two or three extravehicular activities, installation of important devices for mechanical arms as well as various sci-tech experiments and applications.

Lin noted that the Shenzhou-13 team has received special training and made full preparation for the upcoming mission.

The Shenzhou-12 crew have shared their three-month experience with the trio, especially on details and skills about extravehicular activities.

The Shenzhou-13 crew received targeted training courses on spacewalks, research projects, rendezvous and docking tests, and transposition docking of the cargo craft captured and guided by the mechanical arm.

They also had drills for a newly-added error mode of the space station complex, including the core module Tianhe, the Shenzhou-13 spaceship, and the two cargo crafts, namely Tianzhou-2 and Tianzhou-3.

It will be physically and psychologically challenging to work and live in a zero-gravity environment for six months, Lin said, adding that the astronauts will have in-orbit exercises and mental health support to help them stay at their best.

The ground team will optimize their menu and provide psychological support based on the monthly assessment of the astronauts' status, said Lin.

China plans to carry out more extensive and in-depth international cooperation on its space station, making it a space lab for the benefit of all mankind.

China welcomes foreign astronauts to its space station to carry out international cooperation, said Lin at the press conference.

He said the cooperation on astronaut selection and training has already taken place between China and foreign countries.

The CMSA has worked with the United Nations Office for Outer Space Affairs to invite UN member states to conduct scientific experiments aboard China's space station.