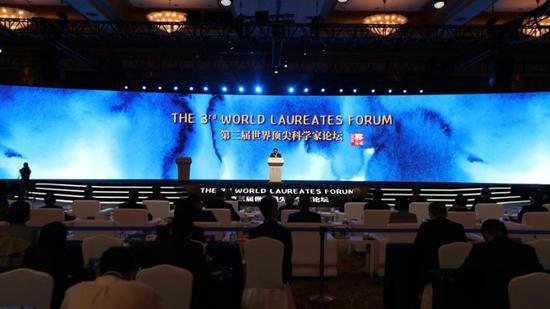 The Third World Laureates Forum kicks off in Shanghai on Oct 30, 2020. (Photo/cctv.com)

The Third World Laureates Forum kicked off in Shanghai on Friday, with 140 major award winners due to address global science and technology issues.

The forum, initiated in 2018 by the World Laureates Association, has gathered world-leading scientists to promote high-level dialogue in the international scientific community. It also advocates international cooperation, supports the growth of young talent and aims to contribute to a better future for humanity, the organizers said.

Due to the COVID-19 pandemic, participants will attend the three-day forum in person and via online platforms. A total of 61 Nobel laureates are due to participate in the forum, according to organizers.

Scientists who will give addresses in person include Harvey Alter, this year's Nobel laureate in physiology or medicine for his contribution to the discovery of the hepatitis C virus and Andrea Ghez, this year's Nobel laureate in physics for her research into black holes. Kip Thorne, who won the Nobel Prize for physics in 2017, will also address the forum.

Scientists will also exchange views on the global fight against the COVID-19 pandemic.

Huai Jinpeng, Party secretary of the China Association for Science and Technology and an academician at the Chinese Academy of Sciences, said in his opening speech on Friday that the forum has continued to focus on the challenges faced by humanity and built a bridge connecting the global scientific community.

In the global fight against the pandemic, scientists across the world have crossed borders and strengthened exchanges of knowledge, such as sharing virus genome sequences and cooperating on vaccine research and development, he said.

The pandemic is still rampant and the global economy is facing a downturn, but science and technology are powerful forces to overcome such difficulties, Huai said.

These challenges serve as a test of scientists' knowledge and are a rare opportunity to "weave a seamless science and technology community exchange network and give full play to the advantages of scientists' openness and innovation".

The foundation aims to boost science exchanges, the development of young talent, the commercialization of science, and scientific education.

It aims to become a center of major cutting-edge science, the base for international scientific organizations and a laboratory for innovation.