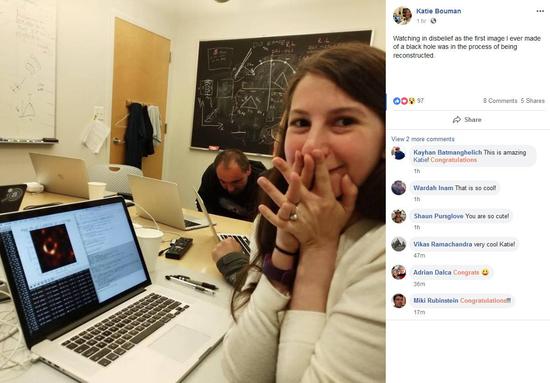 Katie Bouman smiles while the image of the black hole is processed. /MIT Photo

It was the algorithm created by a female graduate student that made the first-ever image of a black hole possible.

For Katie Bouman, a Massachusetts Institute of Technology post-doctoral student, her years of work helped scientists stitch together the snap.

The image reveals the black hole at the center of Messier, a massive galaxy in the nearby Virgo galaxy cluster. The black hole is located 55 million light-years from Earth and has a mass 6.5 billion times that of the Sun.

The glowing ring surrounding the “event horizon” around a black hole is not exactly a photo, but pixels pieced together using the algorithm. Scientists claim that the image would help them probe deeper into many theories.

Heino Falcke of Radboud University explained, if immersed in a bright region, like a disc of glowing gas, we expect a black hole to create a dark region similar to a shadow — something predicted by Einstein's general relativity that we've never seen before.

Bouman created the algorithm when she was a graduate student at the computer science and artificial intelligence center of MIT. The algorithm stitched together data collected from radio telescopes scattered around the globe, through a collaboration, called the Event Horizon Telescope (EHT).

The EHT links telescopes around the globe to form an unprecedented Earth-sized virtual telescope. It offers scientists a new way to study the most extreme objects in the Universe predicted by Einstein's general relativity theory.

“It's incredibly exciting. The goal was to see this thing that was essentially impossible to see, about the size of an orange on the Moon,” Bouman told the Boston Globe.