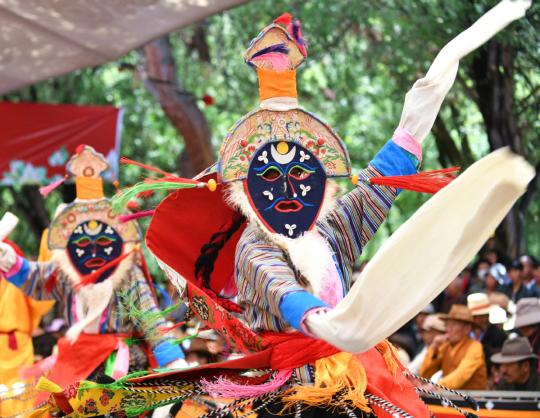 People who have been to Tibet may notice the well-preserved religious and traditional culture, which has much to do with the central government's efforts to protect traditional culture and people's freedom of religious belief, according to a researcher of Tibetan studies.

"The central government has lifted the protection of Tibetan culture to the status of a national strategy by listing the region as one of the national reserves where traditional culture is protected," Zhaluo, director of the Institute of Social and Economic Studies at China Tibetology Research Center, told reporters in Beijing on Wednesday at an informational session about Tibet's democratic reforms.

"Lots of policies have been carried out over recent decades to ensure that the culture of the region is passed down through generations, as well as to guarantee people's freedom of religious belief," he said, adding that the region now has more than 1,700 temples and 46,000 monks and nuns engaged in religious activities.

In the eyes of Zhaluo, to understand the government's policies people should look at Buddhism from two perspectives: its cognitive system and its value system.

"Buddhism diverges from modern science and technology on a range of issues such as the origin of the universe," said Zhaluo, who also serves as a member of the China Association of the Protection and Development of Traditional Tibetan Culture.

"However, some virtues advocated by Buddhism, such as kindness, love and mutual help, are common human pursuits and are similar to the core values of Chinese socialism," Zhaluo said, referring to the concept that encourages people to show a series of moral virtues including love for the country, honesty and amicability.

Against such a backdrop, he said, the central government has merged the values of Tibetan Buddhism and the core values of Chinese socialism and cooperation.