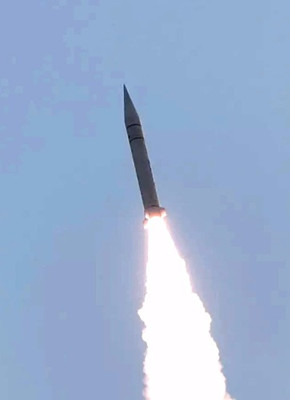 China has successfully developed and tested a cutting-edge hypersonic aircraft that rides its own shock waves, according to the China Academy of Aerospace Aerodynamics in Beijing.

The academy, part of the State-owned space contractor China Aerospace Science and Technology Corp, announced on Friday that the first flight-test of its Starry Sky 2－which it calls the nation's first hypersonic experimental waverider vehicle－was conducted that morning at an unidentified testing field in northwestern China. It said the test was a "huge success".

A waverider is a hypersonic aircraft that has a wedge-shaped fuselage designed to improve its supersonic lift-to-drag ratio by using the shock waves generated by its own flight as a lifting force.

The hypersonic vehicle was first carried by a solid-propellant rocket and then separated as its own propulsion system took over. During the independent flight, the test craft maintained ultrafast speeds above Mach 5.5 for more than 400 seconds and reached Mach 6－7,344 kilometers per hour－according to a statement from the academy.

The United States tested an experimental waverider from 2010 to 2013 that was designed to reach Mach 6.

Tagged as the fastest aircraft ever built, the US HTV-2－which was not a waverider－achieved a record speed of Mach 20, or 24,480 km/h, during its first flight in April 2010.

The fastest manned aircraft in service is the Russian Mikoyan-Gurevich MiG-25, which boasts a maximum speed of 3,470 km/h. A Boeing 747-400ER passenger jet cruises at about 933 km/h.

In the flight-test announced on Friday, the Chinese waverider reached an altitude of 30 km and carried out large-angle maneuvers. The vehicle also tested a host of advanced technologies such as a domestically developed heat-balance thermal protection system, the statement said.

The test marked the first time China officially confirmed its research and development of the waverider, a futuristic concept that can be turned into a hypersonic strike weapon capable of evading all existing air-defense networks.

The US and Russia have been researching and testing waveriders for years, aiming to make use of such vehicles' potential in military applications.

Wang Yanan, editor of Aerospace Knowledge magazine, said the waverider is an ideal design for a hypersonic strike platform or ultrafast aircraft.

"The test confirms that China possesses reliable and advanced technologies for a hypersonic vehicle, as it relied on its own propulsion for a 400-second hypersonic flight－as opposed to such vehicles in other nations that didn't use their own propulsion in the first flight-test," he said.

"The test also showed that we have reached a world-class level for a hypersonic vehicle's key equipment, such as separation devices, thermal protection, flight controls and communications apparatus."

Although China had not revealed its efforts in hypersonic aircraft before Friday's test, Western media have reported that the country had designed at least one type of hypersonic craft, which Western analysts called WU-14 or DF-ZF, and that it had undergone several flight-tests.