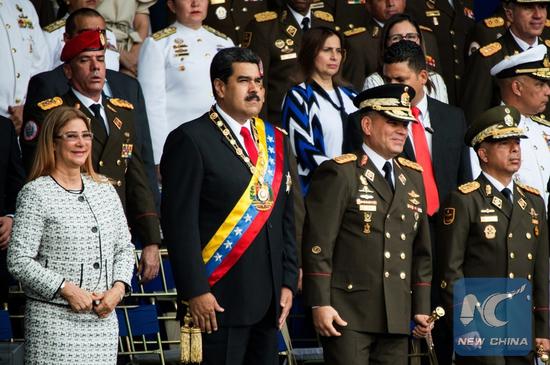 U.S. National Security Advisor John Bolton said on Sunday that there was no U.S. government involvement in the recent assassination plot against Venezuelan President Nicolas Maduro.

Bolton told "Fox News Sunday" that "I can say unequivocally there was no U.S. government involvement in this at all."

Bolton said he had spoken to the U.S. charge d'affaires in Caracas and was told that "Americans are accounted for."

Maduro escaped unharmed from an attempted attack of explosive drones on Saturday night during his speech to commemorate the 81st anniversary of the country's National Guard.

Later, Maduro called the attack as an assassination attempt, and blamed it on the far-right factions in Venezuela, the Colombian government and conspirators in the United States.

In an apparent response, Bolton said "if the government of Venezuela has hard information that they want to present to us that would show a potential violation of U.S. criminal law, we'll take a serious look at it."

After Maduro's re-election, U.S. President Donald Trump signed an executive order banning U.S. individuals or entities within the United States from purchasing any debt owed to the Venezuelan government.