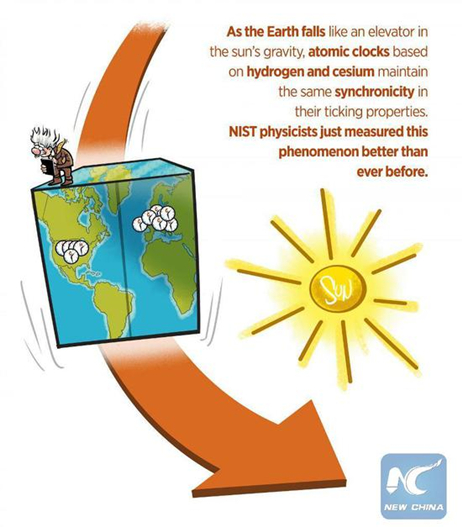 Einstein's elevator: As the Earth falls like an elevator in the sun's gravity, atomic clocks based on hydrogen and cesium maintain the same synchronicity in their ticking properties. NIST physicists just measured this phenomenon better than ever before. (Credit: K. Rechin/NIST)

American physicists have performed the most accurate test ever of a key principle underlying Albert Einstein's theory of general relativity that describes how gravity relates to space and time.

Researchers at the National Institute of Standards and Technology (NIST) reported in a paper published on Monday in the journal Nature Physics a record-low, exceedingly small value for a quantity that Einstein predicted to be zero, by comparing different types of remote atomic clocks.

NIST researchers used the solar system as a laboratory for testing Einstein's thought experiment involving Earth as a free-falling elevator.

Einstein theorized that all objects located in such an elevator would accelerate at the same rate, as if they were in a uniform gravitational field. Moreover, he predicted, these objects' properties relative to each other would remain constant during the elevator's free fall.

In their experiment, the NIST team regarded Earth as an elevator falling through the Sun's gravitational field.

They compared recorded data on the "ticks" of two types of atomic clocks located around the world to show they remained in sync over 14 years, even as the gravitational pull on the elevator varied during the Earth's slightly off-kilter orbit around the sun.

Researchers compared data from 1999 to 2014 for a total of 12 clocks: four hydrogen masers (microwave lasers) in the NIST time scale with eight of the most accurate cesium fountain atomic clocks operated by metrology laboratories in the United States, the United Kingdom, France, Germany and Italy.

The experiment was designed to test a prediction of general relativity, the principle of local position invariance (LPI), which holds that in a falling elevator, measures of non-gravitational effects are independent of time and place.

One such measurement compares the frequencies of electromagnetic radiation from atomic clocks at different locations.

The researchers constrained the violation of LPI to a value of 0.00000022 plus or minus 0.00000025, the most miniscule number yet, consistent with general relativity's predicted result of zero. It corresponded to no violation.

This indicated that the ratio of hydrogen to cesium frequencies remained the same as the clocks moved together in the falling elevator.

NIST already operated a variety of these clocks based on atoms such as ytterbium and strontium.