Public to benefit more from Internet Plus: Premier Li 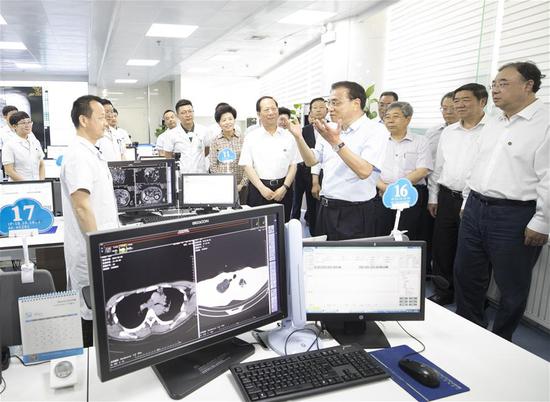 Premier Li Keqiang on Monday said the public should benefit more from the Internet Plus model, which emphasizes applying internet technologies in traditional economic and social sectors.

Li made the call in an inspection tour to the city of Yinchuan, northwest China's Ningxia Hui Autonomous Region.

Li said there was huge potential to leverage the Internet Plus model to improve major areas of livelihood for the public, allowing people in poor or resources-scarce regions to gain access to better public services.

While visiting a local hospital, Li learned that online medical services had reached all communities and counties in the region. He even joined an online treatment section held between local community doctors and experts in Beijing.

Li went on to a middle school to inspect Internet Plus education. The premier said it could help children in poor regions to hear lectures from top teachers.

"With broadened knowledge, children might have their life changed," the premier said.

He urged local governments to deal with "stranglehold problems" concerning rural information infrastructure such as slow internet connections and poor funding, and increase investment in this regard.

The premier also toured a startup center, where nearly 500 start-up companies are located. He encouraged entrepreneurs to work hard and use their knowledge to create a good life.

He later visited a resettled community in Yinchuan, which accommodates more than 700 poor families moving out of inhospitable areas. The resettlers, who have now all said farewell to poverty, told the premier about good housing, accessible tap water and rising incomes.