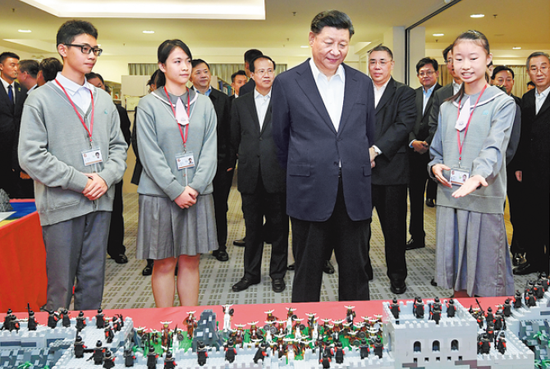 A student explains a school project to President Xi Jinping at the Premier School Affiliated to Hou Kong Middle School in Macao on Thursday. PROVIDED TO CHINA DAILY

Xi made the remark while inspecting the Premier School Affiliated to Hou Kong Middle School in Macao. He attended a class on Chinese history themed "'one country, two systems' and Macao", and delivered a speech to teachers and students at the school.

Xi told them that the class has great and special significance because it demonstrates the fundamental and substantial elements of history and education.

The president stressed the importance of teaching history as a means of consolidating the foundation of patriotism. Every Chinese person should learn the history of the nation, Xi said.

He attributed the strong unity of 1.4 billion Chinese to the country's long history and the Chinese spirit, which he said is also the source of cultural confidence among the people.

China's more than 5,000-year history helps lead to the formulation of a strong sense of national esteem and pride, Xi said, adding that understanding China's history of being bullied after the Opium Wars of the 1800s helps the world to understand Chinese people's strong desire for national rejuvenation.

Noting that this year marks the 70th anniversary of the founding of the People's Republic of China, Xi said all Chinese are proud of the country's glorious achievements and have consolidated their confidence in the country's development path.

The great progress made by Macao after its return to the motherland 20 years ago proved that the fundamental issue in the "one country, two systems" principle is the "one country" component. He encouraged Macao's people to cherish the current situation and boost their confidence in a better future.

Young people in Macao are likely to become a promising generation and one to be proud of, Xi said.

Ahead of this year's International Children's Day on June 1, Xi replied to a letter from pupils at the Premier School Affiliated to Hou Kong Middle School.

In the letter, Xi expressed hope that the students would pass on the school's fine patriotic traditions and contribute to Macao's development and the rejuvenation of the Chinese nation when they grow up.

Xi mentioned the letter again while attending the class on Thursday, saying that he had a deep sense of the pupils' patriotism.

Patriotism has laid the foundation for Macao's implementation of the "one country, two systems" principle, and it allows Macao to move in the right direction in carrying out the principle, Xi said.

Chao Lin-chai, the teacher who taught the class Xi visited, said she believed that Macao will have a bright future with further implementation of the "one country, two systems" principle.

"As President Xi said just now, tremendous changes have taken place in Macao since its return to the motherland 20 years ago, and we hope to tell students about these changes with vivid examples during class," Chao told China Daily.

As a high-school teacher, Chao said she was greatly inspired by the attention Xi paid to history education. The history class has helped students set visionary goals for their studies, she said.

"The students should be educated to love the country and love Macao from the very beginning of their studies," she added.

Olivia Cheang, a student at the Premier School Affiliated to Hou Kong Middle School, said it was a great honor to see Xi join the lesson with her classmates.

"As President Xi put it, we students should learn the history of our country as it helps us to know where we are from and where we are going," Cheang said.

On Thursday morning, Xi also visited a government services center where he learned about how residents benefited from integrated services of administrative departments.