Chinese ambassador to the UK: Hong Kong will keep high degree of autonomy 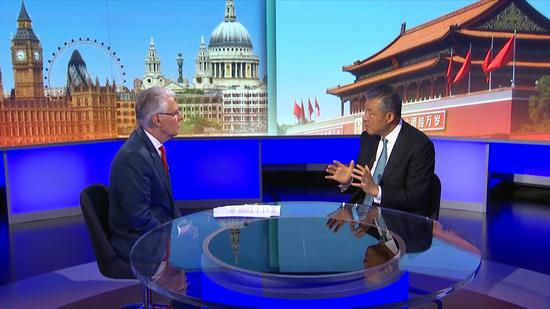 Liu Xiaoming spoke to Stephen Cole on The Agenda

China remains committed to the "One Country, Two Systems" policy and Hong Kong "will continue to enjoy a high degree of autonomy," the country's ambassador to the UK has said.

Liu Xiaoming, who has been ambassador in London for nearly 10 years, said some British politicians "still fail to realize Hong Kong is now part of China – they still treat Hong Kong as part of the UK, or still under British colonial rule."

He added, in an interview for CGTN Europe's new The Agenda show, that this was reflected by people suggesting giving citizenship to all British National (overseas) passport holders in Hong Kong.

The "One Country, Two Systems" arrangement was agreed by China and the UK as part of the handover of Hong Kong in 1997. It gives a high degree of autonomy to Hong Kong over its economic, political and legal systems.

Liu was asked by The Agenda host Stephen Cole if he thought the recent violence in Hong Kong had damaged China's reputation internationally.

"I don't think it has damaged China's reputation. I think more damage should be to some Western countries who I believe are behind these violent activities," he said.

"I think China has gained credit from its success with 'One Country, Two Systems'."

You can watch the full interview, on The Agenda with Stephen Cole this Saturday at 16:30 GMT on CGTN.

The ambassador – the guest for the launch edition of the London-based show – was asked whether China still believes in the "One Country, Two Systems" arrangement.

He said: "Yes, very much so. On the eve of our National Day at the anniversary reception, President Xi reaffirmed 'One Country, Two Systems' for Hong Kong and its people. Hong Kong will continue to enjoy a high degree of autonomy.

"In this country [the UK], some people focus on two systems only. They forget 'One Country, Two Systems' is a whole concept and that one country is the foundation of two systems."