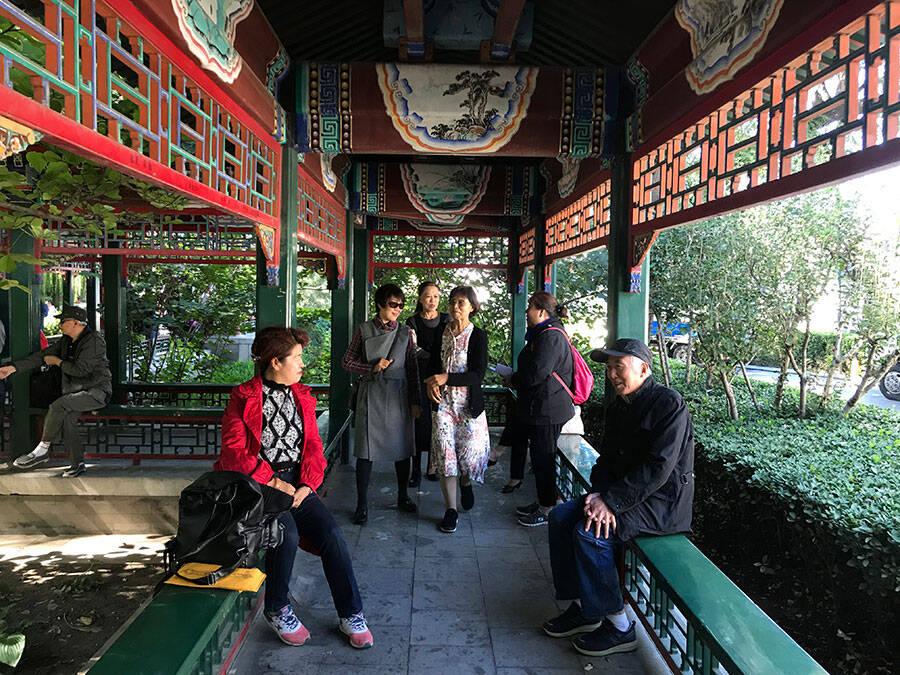 Older people who remarry often face opposition from their children and may even be targeted by opportunists. Yang Zekun reports.

Matchmaking events in Beijing's Changpuhe Park have been a fixture of 72-year-old Fu Cheng's Saturday schedule for about six years.

The capital's parks host numerous matchmaking events where parents look for suitable spouses for their children, but the gatherings in Changpuhe Park are different because the seniors are searching for partners for themselves.

Every Tuesday and Saturday, more than 300 people ages 60 and older visit the park, 150 meters northeast of Tian'anmen Square, in search of companionship.

Unlike the events for younger people, where information such as age, family status, health, income, property and their expectations are displayed on boards, the seniors get to know one another by dancing or chatting.

The Double Ninth Festival, a traditional celebration in the Chinese lunar calendar, held in October every year, is a reminder for people to respect, care for and help seniors.

It's also a time when people pay attention to the happiness of seniors, and solving the issue has become a social concern in China, where being elderly and alone is seen as detrimental to one's life.

With the growth of the older single population, many people have concerns about finding a suitable partner and remarriage, including issues about finances, mental agility, family and their children's opinions. 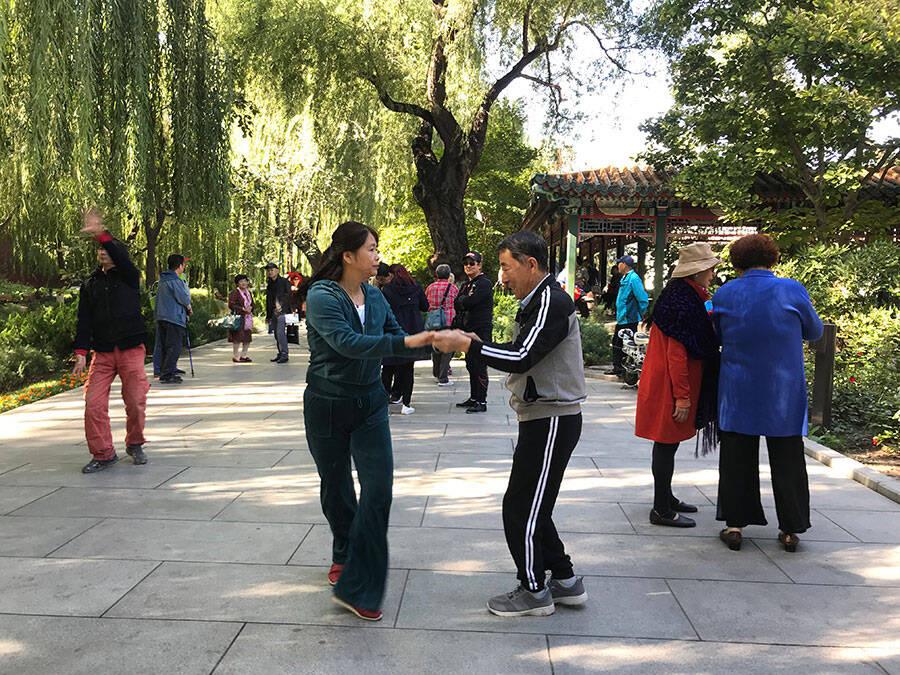 Han Zhen, from Wuchang, Heilongjiang province, wants to find a husband who will understand her and provide companionship.

"It doesn't matter whether he has a house or a car, or where he comes from. As long as he is healthy, has a stable income and can provide a home for me, I will accept him," the 60-year-old said.

In 2005, Han and her family settled in Beijing's Tongzhou district, running a store that sold poultry. However, business was ruined by an outbreak of bird flu, so she closed her shop. At the same time, her husband sustained a blood clot in the brain, and she had to care for him until he died in 2012.

Han works as a cleaner, and her two unmarried sons have urged her to look for a new partner.

"My children think I have sacrificed too much for the family over the years, so they want me to find a partner who can share my life and provide companionship," she said.

Last year, a friend who lived alone died at home, but her body wasn't discovered for two days. The incident so shocked Han that she reconsidered her refusal to find a new husband.

"Older people are susceptible to health problems, including some emerging illnesses, so it's better to have someone around in case an emergency arises. It also reduces the impact on the children," she said.

Han thinks urban dwellers are more open-minded than their rural counterparts and don't gossip or make unpleasant comments about seniors who remarry.

"People in the countryside often think it's shameful if a senior remarries, and it also disgraces their children. They think seniors just need to follow their children's lives until they die. I don't agree," she said.

Fu, the Beijing native, lives alone on a fixed pension. He is looking for a wife who was born and raised in the capital. He has attended several matchmaking events organized by senior communities, but has not found anyone suitable.

"I hope to find a partner I can be with for the rest of my life. I think this is what most seniors need," he said, adding that a Beijing native would share his culture and habits, meaning he wouldn't have to adapt to her lifestyle.

"She would also be registered with the city's medical and social security system, so we wouldn't have problems with healthcare expenses."

He noted that many seniors remain single for fear of disturbing their children's lives, and when the children marry they help to look after the grandchildren.

"Few think about themselves, but now our circumstances and opinions have changed and the family is no longer a factor. It's time to plan for the rest of our lives," he said, adding that his son supports his decision, but some of his friends use the synonyms "nurse" or "dancing partner" at matchmaking events to forestall opposition from family members.

"We can't deny that some healthy seniors who have been single for years have sexual needs. They just cannot express that desire, so people automatically believe that they have no such requirements and think they just need to stay healthy," Fu said.

Chinese Sexuality 2000-2015, a study by Pan Suiming, a former professor of sexology research at Renmin University of China in Beijing, compared the sex lives of seniors. Pan found that in 2015, they had more than half the sexual activity they had in 2000, and they were all less sexually active than in their younger days.

Many local television channels have dating shows, and the ratings are usually quite high. Participants learn about prospective partners and then make a decision about who to date.

Choice, aimed at the middle-aged and seniors, topped the ratings for entertainment programs in the capital when it was launched by Beijing TV in 2009. Geng Ping's children are very supportive of her finding a new husband. They even signed her up for Choice, but the 63-year-old was too shy to appear on the show.

The Fushun, Liaoning province, native started visiting Changpuhe Park after a friend introduced her to the matchmaking events in 2013. Now she attends two or three times a year. 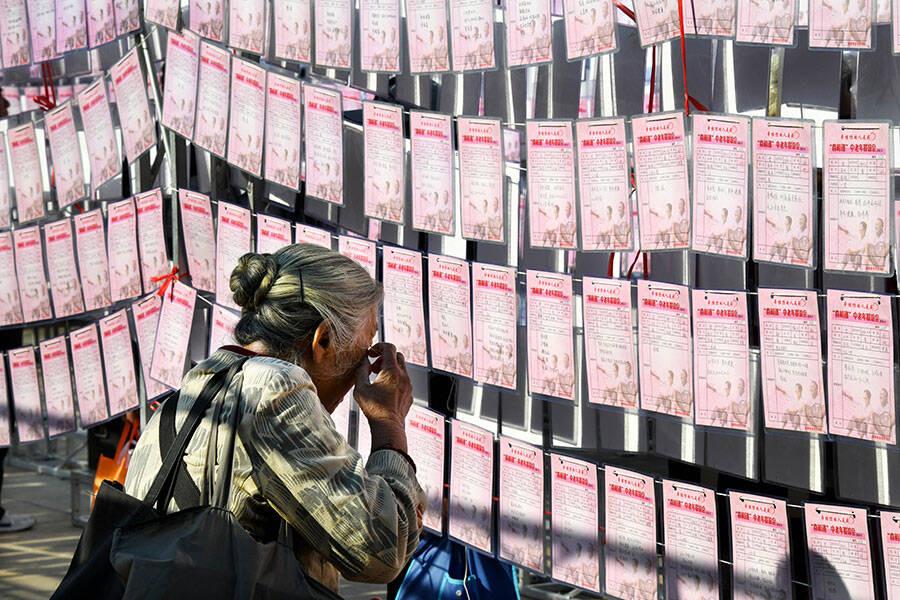 A woman checks a board for people seeking partners in a park in Qingdao, Shandong province, last year.(China Daily/Wang Jing)

Fu said matchmaking is complicated for seniors because it involves the two parties' assets, wills and families. Income, assets, families, health and other issues have to be carefully considered before seniors enter into a relationship.

He thinks that many non-Beijing natives are only looking to obtain something, such as a house, money or help for their children to get Beijing hukou, the certificate of permanent residence.

All people with Beijing hukou enjoy benefits such as welfare and social and medical security, and are allowed to buy homes or cars in the capital. They also have easier access to education and lower tuition fees, and their children are allowed to take the national college entrance examination in Beijing.

Han, the cleaner, has no Beijing hukou, but doesn't feel inferior to those who do. "It's not a big problem; those who put too much emphasis on issues like hukou and finances may not be sincere about dating," she said.

"It's hard for seniors to find a suitable spouse if they expect too much from their new partner. Nobody could bear to be with a man who suspects his wife has only married him for hukou or money. Dating is not just about money - it also needs love. Those who don't want to pay but want a full return are doomed to an unhappy relationship."

Geng wants to find someone with drive and independence. She has Beijing hukou, but never mentions it initially as she thinks people who ask about such things are not honest about their intentions.

Despite an unhappy marriage, the 63-year-old, who sells healthcare products, raised two children. Now the children are earning good incomes, they think Geng needs to live for herself.

"I have spent decades on the family, and now I should try to live for myself and find a spouse to talk to and help me," she said. "The children usually work outside (Beijing), and although I can contact them at any time, I don't want to affect their lives too much, so having a partner would be perfect."

Though Geng, who lives in Fengtai district, wants a new partner, she refuses to compromise on her ideals.

"Some people may have a house, a car, a pension or some savings, but they just rest on their past achievements and have no forward momentum. I don't like such people," she said.

In China, children's opinions can have a great impact on their parents' decision to remarry, because most seniors want their offspring's blessing and believe their lives are intertwined forever.

Though Zhang Ziling, who works for a company in Jiangsu province, has changed her opinion about her father's decision to find a new spouse, she still has concerns.

The 34-year-old's parents divorced eight years ago. Her father, 62, who runs his own business, wants to start a new life.

"He said had not done it before for fear of affecting my life," Zhang said.

While she can't give the idea her full support, she can live with her father's decision after discussing it with him many times. Initially, she was opposed because her father has a comfortable lifestyle and has been single for years, so she didn't see the need to bring a stranger into the family.

"I don't want to adapt to a new person, even though my father has said he has enough savings for a new family and it would not affect me too much. However, it's not just about the money, it is about many things," she said.

Zhang has various concerns, including whether a new stepmother would be sincere about her father. She wonders if he would fit into a new life and what the woman's children would think of their "new family". Would they have any bad intentions?

"Cases such as marrying for money and conflict among remarried families are quite common, and there are also doubts about the children in step-families," she said.

In July, police in Hubei province arrested four married women, ages 60 and older, on charges of targeting seniors who lived alone. The women planned to enter into illegal marriages and gain access to their new partner's savings and bank accounts.

Zhu Shijie, 82, from Beijing's Shunyi district, remarried 10 years ago. His wife - who he met at a matchmaking event in Changpuhe Park - is 24 years younger than him.

His son is in favor of the marriage, but his daughter is opposed. Both children visit their father - whose "new" marriage is harmonious - a couple of times a month.

Zhu believes that that his daughter's opposition stems from a fear that his assets will be shared among "outsiders", even though he left his business to her and her husband when he retired and gave his son three houses in Beijing. 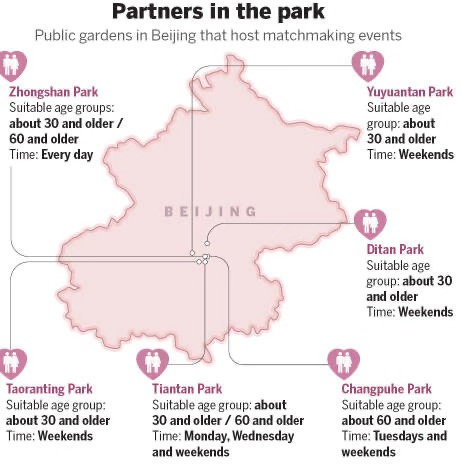 "I think my second marriage is a success," said Zhu, who covers all his and his wife's expenses.

In the first three months they were dating, he gave his wife pocket money of 3,000 yuan ($420) a month. They registered to marry in 2009, after dating and living together for a year. In 2014, Zhu transferred half of the property rights of their house to his wife. He plans to leave it to her in his will.

During the past decade, Zhu has been well cared for by his wife and his stepson, who lives with them. Zhu helped him obtain Beijing hukou and a job.

"It takes effort to get along well with others. If you can't provide them with support and won't adapt, why would they want to live with you? Help your lover to solve their problems and learn more about her, then she will be with you wholeheartedly," he said.