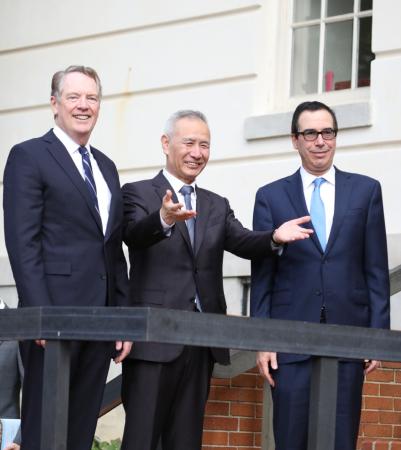 Chinese Vice-Premier Liu He (center) arrives at the headquarters of the Office of the United States Trade Representative and is welcomed by USTR Robert Lighthizer (left) and Secretary of the Treasury Steven Mnuchin Thursday morning. (China Daily/Zhao Huanxin)

They entered the Winder Building in downtown Washington early in the morning, and later ordered takeout lunch. By the time the top Chinese and U.S. trade negotiators concluded their first day of talks, U.S. President Donald Trump had already said "it's going very well".

Exactly how well has yet to be seen, as neither side has released a summary of the first installment of negotiations aimed at resolving a trade war that has been rattling stock markets, stifling international trade and weakening prospects for global economic growth.

Day 1 of the new round of high-level China-U.S. trade talks was mostly closed-door meetings at the headquarters of the Office of the U.S. Trade Representative, chaired by Chinese Vice-Premier Liu He as well as USTR Robert Lighthizer and Secretary of the Treasury Steven Mnuchin.

Prior to the talks, Liu told U.S. business groups that the Chinese team has come with "utmost sincerity" and willingness to carry out serious dialogue on issues of mutual concern, including trade balances, market access and investor protection, and push forward the negotiations to achieve positive progress.

On Day 2, talks will continue, culminating with a meeting between Liu and President Trump at the White House Oval Office.

"Big day of negotiations with China. They want to make a deal, but do I? I meet with the vice-premier tomorrow at The White House," Trump tweeted Thursday morning, moments after Liu, Lighthizer and Mnuchin started discussions at around 9 am.

Standing in the sunshine at the entrance of the building, the three were beaming as they greeted a contingent of journalists. At 4 pm, Liu left with a smile.

Liu told Craig Allen, president of the U.S.-China Business Council, and Myron Brilliant, executive vice-president and head of international affairs at the U.S. Chamber of Commerce, that the trade relationship between the world's top two economies is vitally important. It has a strong spillover effect and global impact.

Businesses and consumers will suffer greatly with trade wars, which are not good for China, for the U.S., or for the whole world, he said, according to a statement of the talks released by the Xinhua News Agency.

Allen and Brilliant said that there are no winners but only losers in trade wars, and that the business community in the U.S. does not want additional tariffs, according to the statement.

Allen said both sides have demonstrated the ability to talk jointly about difficult issues and to resolve them.

"Now would be a good time to begin that process — the downward trends, the dynamics within the relationship are of extreme concern," he said. "We have more than 40 years of investment in this relationship that we wish to protect and to expand."

In his meeting with IMF Managing Director Kristalina Georgieva, Liu said that it is the whole world's common aspiration to end the trade war, and the Chinese side is willing to reach consensus with the U.S. side through this round of talks on the basis of equality and mutual respect, so as to prevent the disputes from escalating and spreading, according to the statement.

Georgieva said that the IMF highly commends China's resolve and sincerity in addressing issues through negotiations and that her organization is willing to play its due role in safeguarding multilateralism and free trade rules, according to the statement.

"We have a common vision to build stronger economies and improve the lives of people and do so on the foundation of sound economic policies," she said.

In her inaugural speech on Tuesday, Georgieva said the cumulative effect of trade conflicts could mean a loss of around $700 billion by 2020, or about 0.8 percent of GDP.