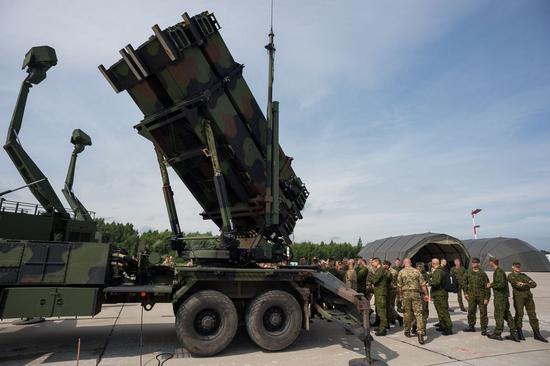 The file photo shows that the air defense missile system Patriot from the United States is seen in Tobruq Legacy 2017 held in Siauliai, Lithuania, on July 11, 2017. (Xinhua/Alfredas Pliadis)

Esper announced in a statement released by the Pentagon that America will send one Patriot missile system battery, four Sentinel radars and approximately 200 support personnel to Saudi Arabia.

The move will "augment the kingdom's air and missile defense of critical military and civilian infrastructure," according to the statement.

Esper added in the statement that he has also approved to put additional U.S. forces "on prepare to deploy order," including two more Patriot batteries and a Terminal High Altitude Area Defense system (THAAD).

The Pentagon chief's announcement came one week after U.S. President Donald Trump approved sending more U.S. forces to the Gulf which are "defensive in nature" and will be "primarily focused on air and missile defense."

Washington has blamed Iran for being responsible for the drone attacks on oil production facilities in eastern Saudi Arabia earlier this month, a claim that has been strongly denied by Tehran.

The United States has kept piling up pressure on Iran through its "maximum pressure campaign." On Thursday, Trump announced a presidential proclamation barring the senior Iranian government officials and their family members from entering into America.

On Wednesday, Iranian President Hassan Rouhani ruled out negotiations with the United States unless the latter lifts sanctions on his country first, further dampening the hope of a meeting between him and Trump on the sidelines of the United Nations General Assembly this week.