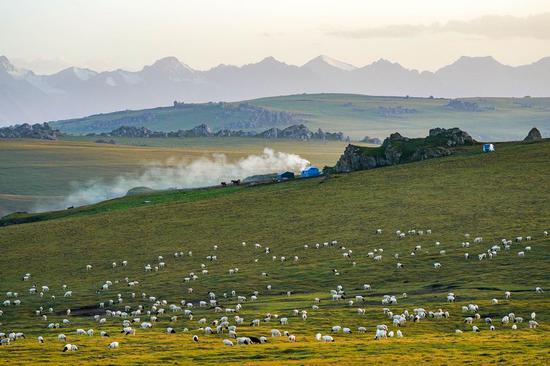 China will continue, as always, to firmly implement the Paris Agreement, fully honor its commitments and promote the establishment of an equitable, rational, and win-win global climate governance mechanism, according to the Ministry of Foreign Affairs.

As a co-lead of the Nature-Based Solution, China is ready to work with all parties to inject robust political impetus into international cooperation on addressing climate change and the implementation of the Paris Agreement.

China values, encourages and supports the important role of young people in ecological protection and climate action, actively raising their awareness of ecological civilization and advocating a frugal, moderate, green and low-carbon lifestyle, according to the document.

From 1999 to the end of 2018, by carrying out Mother River Protection Operation, China has raised 600 million yuan (about 84.9 million U.S. dollars) to build over 5,700 green projects, covering more than 3,467 square kilometers and attracting more than 600 million young people.

Through international cooperation, over 98.32 million trees were planted across China and around 20,000 young people overseas participated in the various events.

As the world's largest renewable energy producer and consumer, China vigorously promotes energy transition. In 2018, clean energy accounted for 22.1 percent in the total energy consumption mix, 7.6 percentage points higher than that of 2012.

Meanwhile, energy consumption per unit of GDP was cumulatively 23 percent lower than that of 2012.

China had phased out more than 800 million tonnes of coal production capacity by 2018 and has closed down over 110 GW of small coal-fired power units with high pollution and low efficiency in recent years, said the document.