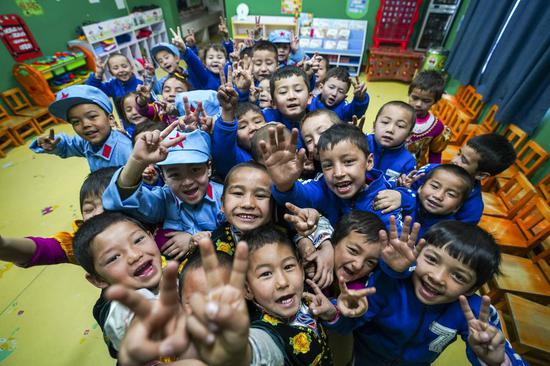 The city of Shihezi is a sprawling green area home to 670,000 people. As September ends and the harvest season arrives, farmers are ready to reap the large cotton fields in the city's suburbs.

Shihezi, about 150 km northwest of Urumqi, is a young city established in the 1950s in Xinjiang Uygur Autonomous Region. It is one of the nine bustling cities that has risen from the bleak Gobi Desert.

While about 1,600 km away in the southwest, Kashgar, an ancient Silk Road city, maintains the charm and authenticity of a 2,000-year-old town.

The contrasting landscape marks the vastness of Xinjiang, which covers about one-sixth of China's land territory, and epitomizes how Xinjiang has progressed both economically and culturally.

This progress was made possible by the peaceful liberation of the region, the 70th anniversary of which will be celebrated Wednesday. In 1949, the liberation struggle gained momentum across the country and the revolutionary struggle of the people of all ethnic groups surged forward in Xinjiang, Tao Zhiyue, garrison commander of Xinjiang, and Burhan, chairman of the Xinjiang Provincial Government, renounced their allegiance to the Kuomintang and welcomed in the First Army Group of the First Field Army of the Chinese People's Liberation Army (PLA), led by General Wang Zhen.

From then on, Xinjiang embarked upon a journey of increasing prosperity, unity and stability.

As proof of the general stability and sound development momentum, not a single terrorist attack has occurred in Xinjiang over the past three years.