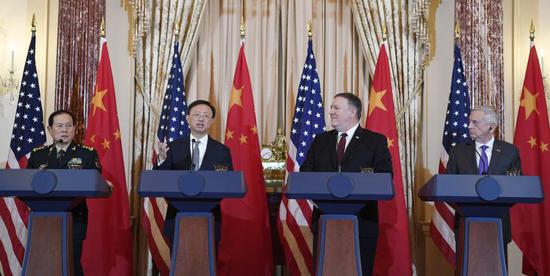 Senior officials meet with reporters after the second China-US Diplomatic and Security Dialogue in Washington on Friday. (LIU JIE/XINHUA)

China and the United States have agreed to promote a bilateral relationship featuring coordination and cooperation, according to official statements, after top foreign affairs officials and defense chiefs of the two countries concluded a dialogue on Friday.

The second round China-U.S. Diplomatic and Security Dialogue in Washington saw in-depth exchanges of respective strategic intentions, in addition to wide-ranging discussions on topics including trade and the South China Sea.

Observers said the dialogue sends out a message that both China and the U.S. seek to ease tensions arising from trade frictions so as to create a positive atmosphere for the meeting between President Xi Jinping and his U.S. counterpart Donald Trump, to be held on the sidelines of the G20 Summit in Buenos Aires, Argentina, which runs from Nov 30 to Dec 1.

The meeting was held after Xi and Trump had a phone conversation on Nov 1, in which they agreed to meet at the upcoming summit.

The dialogue was co-chaired by Yang Jiechi, a member of the Political Bureau of the Communist Party of China Central Committee, U.S. Secretary of State Mike Pompeo and Secretary of Defense James Mattis. China's State Councilor and Minister of National Defense Wei Fenghe, who was visiting the U.S., also attended the event.

The dialogue does not seek immediate resolution of specific issues, but helps the two countries better understand each other's respective "strategic intensions", said Zhou Fangyin, a researcher of Chinese foreign policy at the Guangdong Institute for International Strategies.

Though the U.S. considers China a strategic competitor, that does not mean it does not need partnership with China, Zhou said. So it would be a rational choice to seek a mutually beneficial result instead of allowing ties to trend toward confrontation.

Wu Xinbo, director of the Center for American Studies at Fudan University in Shanghai, said the dialogue is crucially important as it took place at a time when mutual trust is very low.

The Xi-Trump meeting is expected to play a construc­tive role in improving bilateral relations, and sound Sino-U.S. ties are conducive not only for the two countries, but also to global political and economic stability, Wu said.

Both sides strongly agree that under the current circumstances, the leaders' meeting is of great importance to maintaining the steady and healthy development of bilateral relations, according to an official news release from the Foreign Ministry.

In a separate statement, U.S. Secretary of State Mike Pompeo said both countries are committed to working together to resolve differences and cooperate on common goals.

On Saturday, Vice-Premier Liu He met with former U.S. secretary of state Henry Kissinger in Beijing and said the two sides should properly solve issues in areas including economy and trade under the guidance of the consensus reached by the two presidents and in the principle of mutual respect, equality and mutual benefit.